In 1611 at Aix-en-Provence (South of France), Father Gaufridi  was burnt alive. As in the Loudun possessions, sexual themes played a large role in the possession testimony.

The first 20–25 years of the 17th century were host to the peak of accusations in France’s witchcraft hunt. During this time-frame, the number of cases involving demonic possession, priests and nuns outnumber that of any other period.

Signs of a demon invasion were believed to appear at Aix-en-Provence during the year 1609 through the victim Madeleine de Demandolx de la Palud. Madeleine, a 17-year-old Ursuline nun with a history of emotional instability, was returned often to the care of her parents to recover from attacks of depression. Father Louis Gaufridi was a friend of Madeleine’s family and it is believed that he and Madeleine became lovers.

This rumor reached the ears of Sister Catherine de Gaumer, head of the Ursuline convent at Marseilles. She passed the rumor on to Madeleine’s mother, and words were conveyed to Father Gaufridi that his attentions should cease immediately.

It was then that Madeleine was admitted to the Ursuline convent at Marseilles, under the direct supervision of Mother de Gaumer. To de Gaumer, Madeleine revealed the full story of her relations with Father Gaufridi. In order to prevent further damage and to halt any association with Father Gaufridi, Madeleine was transferred to the distant convent at Aix. Two years later, at the age of 19, Madeleine fell victim to what those around her considered to be unmistakable demonic possession; her body was contorted, and in a fit of rage she destroyed a crucifix.

Common convent practice at the time prescribed an exorcism to banish Madeleine’s demons. Not only were the first attempts futile, but further attempts brought damning accusations that Father Gaufridi was a devil worshipper that had copulated with her since she was 17. Three more nuns were soon found to be possessed by demons, and by the end of the year that number had risen to eight. Sister Louise Capeau was considered to be the most extremely afflicted; her ravings and bodily contortions were more hideous than Madeleine’s.

With the situation at the Ursuline convent getting out of control, Father Romillon enlisted the aid of the Grand Inquisitor Sebastien Michaelis. A Flemish exorcist, Father Domptius, was called upon to continue attempts at removing the demons from the possessed nuns.

Twice, Madeleine attempted suicide after the courts found the Devil’s Mark on her body.

Father Gaufridi entered the courtroom after a series of physical and mental torture inflicted during his time in prison. His body had been shaved in a search for the Devil’s Mark, three of which were found and used as evidence against him. A pact with the Devil was produced in court, allegedly signed by Gaufridi’s own blood. A confession was also produced, which Gaufridi had signed in prison, extracted under torture. Included in the confession was an admission of celebrating a Black Mass in order to gain power over women:

More than a thousand persons have been poisoned by the irresistible attraction of my breath which filled them with passion. The Lady of la Palud, the mother of Madeleine, was fascinated like so many others. But Madeleine was taken with an unreasoned love and abandoned herself to me both in the Sabbath and outside the Sabbath…I was marked at the Sabbath of my contentment and I had Madeleine marked on her head, on her belly, on her legs, on her thighs, on her feet…"

In court, Father Gaufridi strongly recanted the confession extracted from him by torture. In the eyes of the court and 17th century Christians, the protest was useless: the signed confession and alleged pact were evidence weighty enough to sentence the priest to death by fire. Even after the sentence was given, inquisitors continued to demand the names of Gaufridi’s accomplices.

April 30, 1611 was the day of Father Gaufridi’s execution. With head and feet bare, a rope around his neck, Gaufridi officially asked pardon of God and was handed over to torturers. Still living after the torture of strappado and squassation, Gaufridi was escorted by archers while dragged through the streets of Aix for five hours before arriving at the place of execution. The priest was granted the mercy of strangulation before his body was burned to ashes.

Sister Madeleine Demandolx de la Palud renounced God and the saints before the church, going so far as to renounce all prayers ever said on her behalf and immediately following Gaufridi’s execution was suddenly free of all possession. Her fellow demoniac, Sister Louise Capeau, was possessed until she died. Both of the sisters were banished from the convent, but Madeleine remained under the watch of the Inquisition.

She was charged with witchcraft in 1642 and again in 1652. During her second trial, Madeleine was again found to have the Devil’s mark and was sentenced to imprisonment. At an advanced age, she was released to the custody of a relative and died in 1670 at the age of 77.

Prior to the seventeenth century, a possessed person’s testimony was not used since demons were known to be liars. In 1613, two years later, the possession hysteria spread to nearby Lille. In Lille it was reported that three nuns were possessed. They accused Sister Marie de Sains of bewitching them. 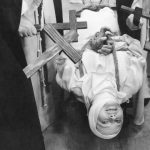