Aka: ABCs, Phantom cats, The Beast of Bodmin Moor.

Alien Big Cats (ABCs), are large felines, such as jaguars or cougars, which have been purported to appear in regions outside their indigenous range  The word "alien" here is meant to denote large felines that are "out of place," rather than "extraterrestrial" 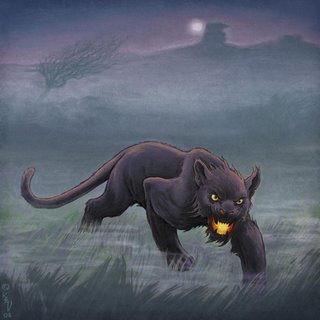 Descriptions of the beast vary according to witness  and match several existing big cats which confirm that it is more a generic term than a species.

Southwestern England around Cornwall and other places in Britain, Australia, New Zealand, Finland, Denmark, and Hawaii.

In the early 1990s, reports began to circulate of alien big cats in southwestern England around Cornwall. Bodmin Moor was the elected place of most sightings (around 300 in 1996) and reports of inexplicably slain livestock.

In 1995 an official study concluded that there was "no verifiable evidence" of exotic felines loose in Britain, and that the mauled farm animals could have been attacked by common indigenous species.

There were also several reports of ABC’s bodies but further examination revealed that the skulls had been imported as part of a leopard-skin rug.

The most blatent theory is that alien big cats are exotic felines which may have been illegally imported from their area of origin to be kept as pets. They would have escaped in the wild, released by their owners or allowed to wander. Puma, clouded leopard, jungle cat, leopard cat and lynx have been killed or captured in Britain, as documented by Karl Shuker in ‘Mystery Cats of the World.’ A more debatable theory is that ABCs are therianthropes who shapeshift into felines and go on a killing rampage.

63-year-old Leslie Maiden admitted that he released both a panther and a cougar into the wilderness about 26 years ago. Their owners, who could no longer keep them because of new laws, had given the cats to him. Maiden says he knows of two other animal collectors who also released their wildcats. Another man, 61-year-old Lewis Foley, says that he also knows of people in Sheffield who released wildcats into the moors as a result of the law. Even if the beasts were 100 years old by now, who said they could not have bred.