Paul Davies, an astrophysicist at Arizona State University and chair of SETI’s post-detection taskforce, argues that alien brains, with their different architecture, would interpret information very differently from ours.

What we think of as beautiful or friendly might come across as violent to them, or vice versa. “Lots of people think that because they would be so wise and knowledgeable, they would be peaceful,” adds Stewart. “I don’t think you can assume that. I don’t think you can put human views on to them; that’s a dangerous way of thinking. Aliens are alien. If they exist at all, we cannot assume they’re like us.” 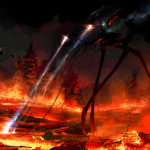