The Alpha wolf is one of the two head wolves that run the pack and most of the time are the only wolves in the pack aloud to breed.

Alpha werewolf is the name given to those who have been given the power of shape shifting through the use of ointments or charms or born to a werewolf (heredity).

Passed on from generation to generation, and sometimes skipping one, the hereditary form manifests itself after the person reaches puberty. When using magic, it is quite possible for the creature to perform amazing feats of strength and even call on surnatural and psychic powers.

For those who have acquired the “curse” through their own will, by entering into a pact with the Devil himself, the change can be done at will and even in the absence of a full moon.

It is said that humans who enter into this pact do so out of desperation and often, in an effort to seek revenge for the death of a loved one.

The term was coined from The Wolf: The Ecology and Behavior of an Endangered Species, a book written in 1970 by David Mech where he created and used the term alpha wolf, and continued to propagate the idea of wolf packs based around competitive hierarchies focused on dominance. 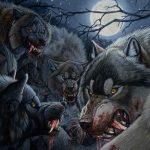