Origin: In Persianmythology Angra Mainyu, the Father of Lies created the dragon Azhi Dahaki to rid the world of righteousness.

Description: This fearsome monster had three heads, three jaws and six eyes; his his body was filled with lizards, scorpions and other foul reptiles. If he weer ever cut open, these venomous creatures would infect the world. 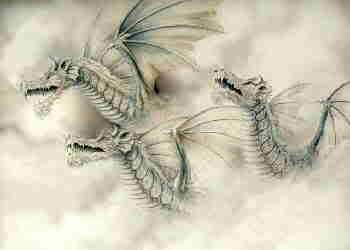 Myth : The ancient Zoroastrian hymn Zamyad Yasht fells how Azhi Dahaki sought to extinguish the light of the sacred flame known as The Divine Glory. Atar, the God of Fire, ran to save the glory but the dragon challenged the God by threatening to destroy the light of his fire forever. Atar responded by swearing to send his flames throughout the Dragon’s body. In fear, Azhi Dahalq drew back but in retribution for the damage that he did to humankind, the divine hero Thraetaona bound and imprisoned him on Mount Demavend, near the Caspian Sea.

Zoroastrians believe that when the world comes to an end, Azhi Dahaki will break free from his bonds and escape from the mountain. His furry, so long repressed will allow no interference as he attacks all creation, devouring a third of men and animals until he is killed by another great hero, theyouthful Keresaspa.