Barnum was born into a poor family in Connecticut in 1810. His genius lied in his ability to drive human psychology to meet his own ends, and his talent for hatching the most sensational and bizarre schemes.

In her book Circus! Marian Murray notes that Barnum was known to many as a "trickster, a perpetual liar and unscrupulous cheat who perpetrated a series of clever deceptions on a public he looked upon as fools." Barnum was also undisputed trail-blazer in the hyperbole and superlatives of circus language. "By the end of Barnum’s life," notes Murray, "such adjectives as mammoth, monstrous, gigantic, colossal, elephantine, amplitudinous, stupendous, marvellous, magnificent, glorious and superb were to have lost virtually all meaning." 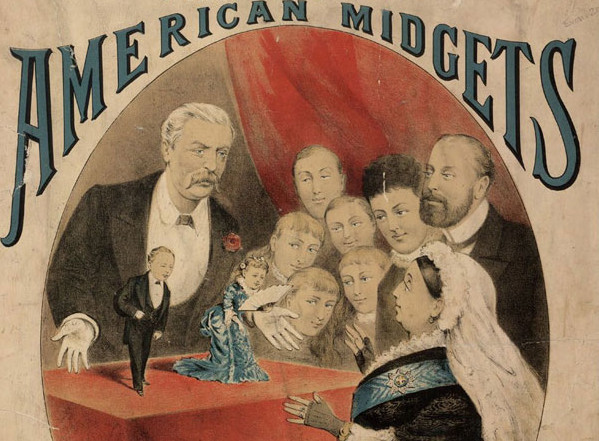 Barnum stumbled upon his true vocation when he heard about a crippled and helpless black woman, called Joice Heth, being displayed in a freak show in Philadelphia. She was reputed to be 161 years old and to have been George Washington’s nurse. Upon seeing the old crone for himself, Barnum promptly bought her for $1000 and took her to New York to exhibit, where she earned him $1500 a week. When the old woman died within a year following a strenuous tour, an autopsy revealed that she was no more than 80.

In 1841, Barnum, with the help of his charisma and investor Francis Olmstead, purchased the Scudder’s American Museum on Broadway and renaming it Barnum’s American Museum. Barnum advertised massively throughout New York City , promoting the world’s strangest and most exotic curiosities. The collection was incredible, ranging from flying fish and mud iguanas to grizzly bears and the "first and only" hippopotamus in America, from human freaks such as the Bearded Lady, Siamese twins and Albino family, to "educated" dogs and seals.

The Museum burned to the ground in 1865 and the only animals saved were the "educated" seal, one bear, and a few birds and monkeys. Barnum rebuilt a New American Museum but this too was destroy by fire in 1868 with the same devastating loss of animal life.

When Barnum arrived in England in 1844 the British showmen were amazed that Barnum was hoping to attract so much money for simply exhibiting a dwarf. However, Barnum created a novelty act that would become one of the greatest attractions of the Victorian Era. Charles Stratton – or Tom Thumb – was eleven years old when first exhibited by Barnum in 1843. Barnum changed his nationality from American to English, he changed his age from four to eleven years old, and his name from Charles Stratton to General Tom Thumb. When he left the States for his European tour he became an instant attraction and was presented to Queen Victoria on three separate occasions.

Although he was already 60, Barnum launched  "The Greatest Show on Earth," and America’s modern circus dynasty. In 1871 "P.T. Barnum’s Travelling Exhibition and World’s Fair on Wheels" took to the road, equipped with the largest number of caravans ever seen in a circus, and a tent that held 10,000 people. The sideshow’s star attraction was four "Fiji Cannibals" along with the now classic attractions: the giant, the fat lady, the midget, the three-legged boy, the armless wonder or the thin man. Many showmen attempted to clone Barnum’s enterprise, but none had Barnum’s sense of showmanship or advertising, so none were ever truly successful.

In 1907, after Barnum’s death, Ringling Bros. bought out Barnum & Bailey, creating the world’s largest circus corporation. By 1941, their famous "The Greatest Show on Earth" was transported around the country on four trains with a total of 107 twenty-one metre long carriages and freight wagons. The big top of the Ringling Bros. and Barnum & Bailey Circus covered the equivalent of a hectare, was supported by center poles 20m high and sheltered 12,000 people.

In 1956, in what marked the end of an era of grandiose, increased freight charges forced "The Greatest Show on Earth," to give up its itinerant way of life and appear only in exhibition halls and other metropolitan buildings. According to a statement by the owners, the circus had become the victim of television, bad weather, traffic congestion, labour troubles and mounting costs.