Bed bugs are small wingless insects that feed solely upon the blood of warm-blooded animals.

There are at least 92 known species of bed bugs found throughout the world that have existed since ancient times. The most common species is the Cimex lectularius , which is best adapted to human environments.

Adult bed bugs are light brown to reddish-brown, flattened, oval shaped and have no hind wings but front wings are vestigial and reduced to pad-like structures. Bed bugs have segmented abdomens with microscopic hairs that give them a banded appearance. Adults grow to 4–5 mm in length and 1.5–3 mm wide. An outbreak can spread quickly, since females lay up to five eggs a day and 500 in a lifetime. 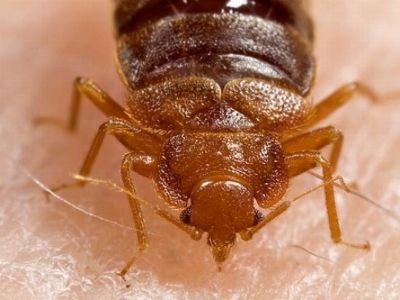 Bedbugs are generally active only at night, with a peak attack period about an hour before dawn, though given the opportunity, they may attempt to feed at other times of day. Attracted by warmth and the presence of carbon dioxide, the bug pierces the skin of its host with two hollow tubes.

With one tube it injects its saliva, which contains anticoagulants and anesthetics, while with the other it withdraws the blood of its host. After feeding for about five minutes, the bug returns to its hiding place. The bites cannot usually be felt until some minutes or hours later, as a dermatological reaction to the injected agents.

Although bedbugs can live for up to 18 months without feeding, they typically seek blood every five to ten days.

Repeated exposures to bed bug bites during a period of several weeks or more causes people to become sensitized to the saliva of these bugs; additional bites may then result in mild to intense allergic responses. The skin lesion produced by the bite of a bed bug resembles those caused by many other kinds of blood feeding insects, such as mosquitoes and fleas.

For first time victims, lesions sometimes can be confused with poison ivy and spider bites.

With the arrival of potent pesticides, famously DDT in the 1940s, bed bugs almost disappeared in Western countries. The recent resurgence may have been caused by increased international travel, resistance to insecticides, and the use of new pest-control methods that do not affect bed bugs. 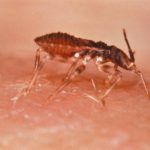