One of the strangest incidences involving werewolves was that of Benandanti (a term roughly translated into good walkers, those who go well or good-doers)  in northern Italy.

In this case the werewolves were men who left their bodies and assumed the shape of wolves. After becoming wolves they descended to the underworld to battle witches.

Thiess confessed to being a werewolf, saying his nose had been broken by a man named Skeistan, a witch who was dead at the time he had struck Thiess. According to Thiess’ testimony Skeistan and other witches was preventing the crops of the area from growing. Their purpose for doing this was so they could carry the grain into hell. To help the crop to continue to grow Thiess with a band of other werewolves descended into hell to fight the witches to recover the grain.

The warring of the werewolves and the witches occurred on three nights of the year: Saint Lucia, Pentecost and Saint John (the seasonal changes). If the werewolves were slow in their descent the witches would bar the gates of hell, and the crops, livestock, and even the fish catch would suffer. As weapons the werewolves carried iron bars while the witches used broom handles. Skeistan broke Theiss’ nose with a broom handle wrapped in a horse’s tail.

Thiess was determined in his confession, denying he had ever signed a pact with the Devil. He refused to see the parish priest who was sent for to chastise him, saying that he was a better man than any priest. He claimed he was neither the first nor the last man to become a werewolf in order to fight witches. Finally the judges, probably out of desperation, sentenced Thiess to ten lashes for acts of idolatry and superstitious beliefs. A.G.H.

In the Friuli region of Italy, Slavic, Germanic, and Italian traditions combined to form the Benandanti cult. Many Benandanti were followers of Diana.

‘The present research now establishes…the positive existence at a relatively late date (from c. 1570) of a fertility cult whose participants, the Benandanti, represented themsleves as defenders of harvests and the fertility of fields…This belief is tied to a larger complex of traditions (connected, in turn, with the myth of nocturnal gatherings over which female deities…presided)…In the span of a century, as we shall see, the Benandanti were transformed into witches and their nocturnal gatherings, intended to induce fertility, became the devil’s sabbat, with the resulting storms and destruction.’

Four times a year, on holidays associated with the planting and harvesting of crops, the Benandanti were called to Gatherings. It was at these Gatherings that the major battles with Malandanti (loosely translates to ‘evil-doers) or Strigoni were fought. The Benandanti fought with fennel stalks, the Malandanti with sorghum. It was believed that on certain particular nights the soul of the Benandanti gets out of the body to participate in meetings with other Benandanti .

But perhaps the most interesting aspect of the Benandanti was the method by which they were chosen. One did not decide to be Benandanti, the calling was forced on certain people as an accident of birth. Women and men born with a ‘caul’ (inner fetal membrane still covering the body, especially the head) were believed to have mysterious healing powers and the ability to see witches. Cauls were sometimes saved by these Benandanti and worn about their necks as amulets.

Much like the shamen of other cultures, the Benandanti testified they left their bodies at night, (what we call astral projection) sometimes shape shifting into animal form, sometimes riding animals or household tools. While ‘out’ they performed work which, we now know from modern research, was typical of shamans around the world. They healed and protected people of the village, they kept the paths of the dead from this world to the next secure, and they fought to protect the village from Malandanti.

The ‘doers of good’ retained their anti-witchcraft stance until around the year 1610. Shortly afterward, they came under persecution by the Inquisition, and were identified as witches. They maintained that they were an army for Christ in the war against evil. As a result the local beliefs underwent a profound transformation, and by 1640 the Benandanti themselves were acknowledging that they were in fact ‘witches’. 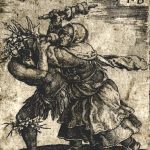