Wildmen stories are found among the indigenous population of the Pacific Northwest. The legends existed prior to a single name for the creature. They were known as ts’emekwes (Lummi) stiyaha, kwi-kwiyai or skoocooms. 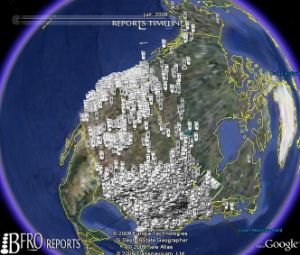 The local legends were combined together by J. W. Burns in a series of Canadian newspaper articles in the 1920s. Each language had its own name for the local version. Burns coined the term Sasquatch, which is from the Halkomelem sásq’ets and used it in his articles to describe a hypothetical single type of creature reflected in these various stories. Burns’s articles popularized both the legend and its new name, making it well known in western Canada before it gained popularity in the United States.

The oldest written account of Bigfoot on record occurred in 986 A.D. by Leif Erikson and his men. During their first landing in the new world, the Norsemen wrote about monsters that were horribly ugly, hairy and swarthy.

One of the earliest published reports of Bigfoot was in a California newspaper, the Antiloch Ledger, during 1870. He reported the sighting of a gorilla or wildman in the bush. He also noted that the head seemed to be set closely on its shoulders, without a neck.  However, it also goes on to say that it had relatively short legs, and therefore could have been a chimpanzee or another monkey.

Thousands of notable sightings occurred throughout the 20th century, with witnesses coming forward to newspapers throughout.

Stories ranged from stumbling upon the enormous footprints to being abducted or attacked by the creatures. About a third of all Bigfoot sightings are concentrated in the Pacific Northwest, with most of the remaining sightings spread throughout the rest of North America.

Some Bigfoot advocates, such as cryptozoologist John Willison Green, have postulated that Bigfoot is a worldwide phenomenon.

The most notable sightings include: