Physical death is the cessation of normal body functions, the irreversible loss of both components of consciousness, arousal and awareness . In legal terms defined as “brain death”, i.e., loss of higher cortical functions.

Death is the irreversible ending of life. Biologically, death can occur to wholes, to parts, or to both. For example, it is possible for individual cells and even organs to die, and yet for the organism as a whole to continue to live; many individual cells live for only a short time, and so most of an organism’s cells are continually dying and being replaced by new ones.

When organisms die most of their cells live for some time afterward. Organs can be removed for transplantation.

Irreversibility is often cited as a key criterion of death. By definition, a dead organism cannot be brought back to life; if it were to be, that would indicate that it had never been dead. Biochemically, it is unrealistic to think that death could be reversed. As soon as tissues die, autolysis sets in and enzymes begin to destroy the cells.

A common misconception is that the Second Law of Thermodynamics dictates that all complex systems must eventually deteriorate, so it is not likely that any species could ever be immortal. However, this aspect of the Second Law applies only to closed systems, which organisms are not.

Before the discovery that the heart could be resuscitated, people assumed that death came when the heart ceased to function. With resuscitation came the uneasy feeling that what appeared to be death might merely be coma, overdose, or shock. Such fears in the 19th century led to the recently deceased being watched for a period of days, and to crypts and coffins being made ‘escapable’.

Brain death (irreversible cessation of all function of the brain) means death of both the upper brain and brain stem. A person who is brain dead has lost both the capacity to think and perceive, as well as the control of basic body functions. The term “brain-dead” was coined in 1965 when a renal transplant took place using organs donated from a patient with no recorded brain function. In many countries brain stem death is considered legal death, even if the body is kept alive with artificial means. This opens up for organ transplants of heart, liver and lungs, where the donor has to be dead.

A 1981 President’s Commission found that cessation of blood flow, lack of respiration, and loss of full brain function defines death. But because the body can be kept alive by only one primitive part of the brain — the brainstem — confusion remains. Cases like anencephalic babies — born without the more evolved parts of the brain but with beating hearts and functioning organs — raises the question as to what constitutes life, as well as what defines death.

A first basic test for brain activity was to pour cold water into one ear and watch for any movement of the eyes. In 1963 the electroencephalograph (EEG) was invented which could pick up and amplify the small electrical voltages from the cerebral cortex of the brain. Tests suggested that when there was zero activity (a “flat” EEG) for 36 hours, a patient could be considered dead. Patients in a persistent vegetative state still have an active brain stem sustaining autonomic activity. Some insist that a person is still medically alive until their brain stem dies, although when the cerebral cortex dies, all ability to think has been irretrievably lost. 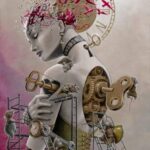