A Black Mass is a parody of the Catholic mass sometimes practiced by wealthy opponents of the Church in the Dark Ages. Some so-called ‘black masses’ were performed by priests to curse enemies, a practice condemned by the church. While this practice was ascribed to witches during trials, it is unlikely it was practiced by common people. Modern Satanists sometimes perform a ‘black mass’ for theatrical effect, but it is not a standard practice in Satanism or modern witchcraft. The Black Mass combines various elements:

The Black Mass is a magical ceremony and inversion or parody of the Catholic Mass that was indulged in ostensibly for the purpose of mocking God and worshiping the devil; a rite that was said to involve human sacrifice as well as obscenity and blasphemy of horrific proportions. The origin of the belief in the Black, or Satanic, Mass goes back to medieval magic and witchcraft, yet no one really knows the early history of this magical act, for there exists no single reliable, first-hand description.

A witch who said she was present described a Black Mass at a sabbath in France in 1594. She claimed that the ceremony had taken place on St. John’s Eve in a field with about sixty people present.

The celebrant wore a long black cloak devoid of the customary cross, and his assistants were two girls; while a slice of turnip, black (either stained or putrid), was used instead of consecrated bread. Other stories of the Black Mass include mention of black triangular or hexagonal hosts and a black chalice;

Eric Maple, a leading authority on witchcraft, goes so far as to assert that the Black Mass is an illusion, fostered by the press, that never played any part in witchcraft.

The Abbe Boullan (1824-93), a defrocked Catholic priest who believed that he was a reincarnation of John the Baptist, is reported to have celebrated a Black Mass in vestments on which an inverted crucifix was embroidered, with a pentagram tattooed at the corner of his left eye (the left being the side of evil). He recommended the ceremonial sacrifice of a child at the high point of the Mass, and the use of consecrated hosts being mixed with feces as a cure for nuns who complained they were tormented by devils.

The occultist Aleister Crowley devised Satanic rituals, but the intention appears to have been anti-Christian rather than criminal. The Church of Satan has based its much publicized diabolism upon a rejection of the Christian ethics of self-denial and humility. 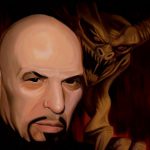