According to legend, Bloody Mary (also known as Mary Worth, Mary Margaret, etc) is the ghost of an unhappy woman who either committed suicide due to having her baby stolen or was accused of murdering her children. Depending on the variation used, this turned her spirit mad with grief or anger and she would haunt the world via the use of mirrors.

The Bloody Mary apparition allegedly appears as a corpse, witch, or ghost that can be friendly or evil, and is sometimes seen covered in blood. Another origin for the name might be English Queen Mary I of England, who was nicknamed “Bloody Mary”, due to the hundreds of people she had burned at the stake during her rule from 1553 until her death in 1558.

Known in life as Mary Worth it is traditionally said that “Bloody Mary” will appear if a brave (or foolish) soul chants her name three or more times next to a mirror in complete darkness at midnight. According to the variations of the legend above one is also said to be able to make the ghost appear via stating “Bloody Mary, I killed your baby” or “I believe in Mary Worth”.

Bloody Mary also allegedly appears to individuals or groups who ritualistically invoke her name in an act of catoptromancy. This is done by repeatedly chanting her name into a mirror placed in a dimly-lit or candle-lit room. The name must be uttered thirteen times (or some other specified number of times).

If she is in a “merciful” mood, Bloody Mary is said to simply turn her victim insane or (in rarer tales) she may take a fancy to someone and drag them into the mirror.

A Clive Barker movie, Candyman, is based on the legend. The Bloody Mary legend has also merged with the local mythology in some areas. For instance, in Kentucky and Tennessee, she takes the form of the Bell Witch. The modern legend of Hanako-san in Japan strongly parallels the Bloody Mary mythology. 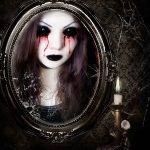 Bloody Mary aka Mary Worth