The Candirú (Vandellia cirrhosa), sometimes called the Vampire Catfish, is a type of freshwater catfish found only in the Amazon or Orinoco rivers.

Those are the only known habitats for this tiny, parasite, which attacks other fish by swimming into their gill slits and sucking their blood and, on rare occasions, attacks a person by swimming into his or her urethra. 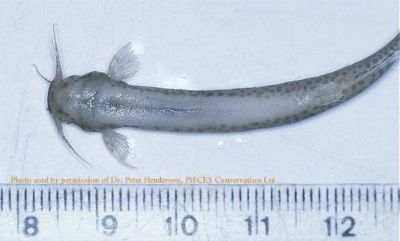 Candiru are hard to detect in their natural habitat, being semi-translucent and small in size. Candiru are endowed with finely tuned sensors that pick up traces of ammonia in water, typically emitted from the gills of passing fish. The Candiru follows the ammonia trail and uses barbed spines on its gill covers to lodge itself in its victim’s gills, drawing blood whenever it feels hungry.

Though anecdotal tales of Candiru lodging themselves in human urinary tracts go back centuries, there is only one documented case in modern times (1997). Silvio Barbossa (above), the male victim, survived 2 hours of surgery required to remove the 13.4cm long Candiru from its final resting place in his scrotum.