There are many references to ghosts in Chinese culture. Even Confucius said, “Respect ghosts and gods, but keep away from them.”

Many of the Chinese ghost beliefs have been accepted by neighboring cultures, notably Japan and south-east Asia. Ghost beliefs are closely associated with the traditional Chinese religion based on ancestor worship, many of which were incorporated in Taoism. Later beliefs were influenced by Buddhism, and in turn influenced and created uniquely Chinese Buddhist beliefs.

Many Chinese today consider that it is possible to contact the spirits of their ancestors through a medium, and that the ancestor can help their descendants if properly respected and rewarded.

According to legends and Chinese folklore, during the seventh lunar month, the gate of hell is wide open and all the spirits are let out to stay with their living families until the end of the month when they have to return to hell.

There is a festival called Zhongyuan Jie or Yulan Jie, on the 15th day of the seventh lunar month – that is Friday, August 23. Local families used to place offerings for their ancestors – usually food, incense, candles and joss money – to be spent in the underworld.

The festival is recognized in both Taoism and Buddhism, the two dominant religions in China. In both, this day is a time when the souls of the dead are redeemed.

The word Yulan means “liberation from suffering” in the original Sanskrit (ullambana), and Yulan Jie has its roots in the Buddhist story of Mu Lian, a disciple of Buddha, who saved his own mother.

It is said that Mu Lian (Maudgalyayana in Sanskrit), who gained magical powers on reaching a high level in knowledge of Buddhist doctrines, saw his mother starving in hell, with a huge belly and very small mouth, unable to swallow any food.

His mother had been a miserly woman and had not done a single charitable deed in her lifetime. She was condemned as a hungry ghost in the lowest depths of hell. Mu immediately fed his mother some rice, but the rice was reduced to ashes when it touched her mouth.

Mu begged Buddha for help, but Buddha said the mother had committed too many sins in her lifetime. The Buddha advised Mu to collect various types of fruit and vegetables in Yulan basins as an offering to the Buddhist monks. Only by doing this could his mother´s suffering be alleviated.

Future generations continue to put fruit and vegetables in Yulan basins as offerings to monks, and the festival turned into a time for remembrance of ancestors.

In many places of South China and Japan, people used to make paper boats on each of which a lit candle is placed. They would put these little lanterns into the river and let them float down the water. Children would try to follow the paths of their lanterns from the riverbank to see whose lantern could go the farthest.

One folk story said this custom is to send the lanterns as a guide for the spirits of their loved ones, to show them the road back home. Another tale said these lanterns are to send away the spirits of those who died of drowning. It is believed that these spirits, “drowned ghosts”, will suffer in the water until someone else comes to take their place.

It is thought that many people have died by drowning simply because they were pulled into the water by ghosts who were eager to find a substitute for their suffering.

Chinese people have had very practical attitude toward religion and faith. Religions, either initiated in China like Taoism or through other countries like Buddhism and Christianity, are perceived in a totally pragmatic way.

People build temples and worship whatever god they believe will be efficacious and will respond to prayers. They do not care much about what religion the god represents.

In folklore and general belief, all the gods are like officials in charge of different affairs, judging people from different aspects and giving out punishments and rewards.

In Buddhist books, there are vivid descriptions about the horrible hell, the torment that sinners would suffer after death. Those with the worst sins would be sent to the 18th floor of hell, which means they could never be born as a human again.

And those who died of persecution, or after being wronged, would seek revenge in the living world. They would become malicious ghosts, who would bother the living and bring bad luck to people and places affected by their hatred.

Many scary movies have been made about ghosts. Classical literature also has stories about ghosts seeking justice through super-natural means.

Dou E, a character in a drama by Guan Hanqing (circa 1210-1300) was executed on false accusations and she made some severe curses before her death: it would snow in summer and there would be drought for long years.

All her curses were realized and it was not until her father came back to the region as a high official and redressed her case under the guidance of her spirit, did the natural disasters stop.

Chinese ghosts don´t always take on real forms. Often they come and leave in a breeze. But sometimes they come in horrifying images of their death: hanged ghosts have protruding tongues, drowned ghosts leave water wherever they stay, and young beautiful women make the most scary ghosts, with long hair covering their pale faces with blood trickling down.

But ghosts are not invincible. There is a figure in Chinese legends whose sole mission is to catch and devour ghosts.

The character, Zhong Kui, is often pictured as being tough and dark, with a thick beard. His portrait is often hung in the house to protect the family from being hurt by wandering ghosts.

Not all Chinese communities take the festival seriously. In a modern metropolis like Shanghai, people cannot expect to see large-scale rituals of worshiping or temple operas held on the day.

But if you look carefully, you will find in some inconspicuous corners in residential quarters, candles being lit and incense and joss paper being burned. It is the past ones of the family enjoying the offerings of the living. 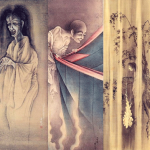