Cone of power is the name to design the union of witches’ forces gathered around the circle towards the reach of a common goal. In parts of ancient Syria, the cone was a symbol of Astarte.

In Neo-pagan witchcraft it is a field of psychic energy or power produced in unison by a coven or group of witches. Sometimes the phenomenon is referred to as raising the power.

Witches usually join hands, frequently within the magic circle, while dancing around and singing to raise the power.

The process also employs visualization. The circle is the bottom of the cone. the witches or persons within the circle produce the power which rises to the apex of the cone which extends into infinity. When this psychic power peaks in intensity it is released through the apex to accomplish a goal such as to heal or cast a spell.

Witches have claimed victories against hostile forces with the use of cones of power. In 1588 they helped to defeat the Spanish Armada , and in the 1700 they raised power against Napoleon.

In 1940 there was much fear that Hitler would invade England which resulted in producing “Operation Cone of Power” on Lammas Day, August 1. Hundreds of witches from covens throughout southern England gathered skyclad in New Forest to send Hitler and his generals telepathic thoughts to stay out of England.

In 1971, on Lammas Day, California witches gathered together to perform a similar ceremony to end the war in Vietnam.

Coveners are arranged in a circle man and woman alternately, facing inwards and holding hands (left plams up, right palms down). HPS stands in the center.

All dance and chant either the  Witches’ Rune or the Call of the ancient Mysteries:

Dance and chant faster and faster until HPS senses that the time is right, whereupon she calls:

All shall drop to the ground in a circle facing the HPS.

If there is coven work to be done, now is the appropriate time to do it. Or a meditation upon the Moon’s season, or such other matter as may be fitting or needful. At an esbat  Wine and Cakes will follow, but at a Sabbat the Great Rite comes first.

Source: From The Witches’ Way by the Farrars. 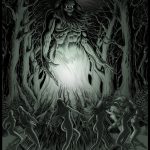