The Dragon is often the first creature to roam the universe just after the Creation. Sometimes he is even responsible for the creation of the universe (Amon/Amam in Egypt, Ophion in Greece, the rainbow serpent in Australia and Africa, Ananta/Prajapam in India…). He is the frontier between our world and beyond.  His death sets free creative forces that found and molder civilizations. The serpent Vasuki when strangled by the asuras and the gods create the ocean, the sun, the moon, the Goddess and Amrita, the elixir of immortality. Ourobouros circles the earth and represents the endless series of destruction and creation.

As the myth developed in the western world, dragons came to represent the chaos of original matter with the result that with man’s awakening conscience a struggle arose, and the created order constantly challenged the dragon’s power.

The dragon also represents the Word which was in the beginning and which created and now sustains all things . 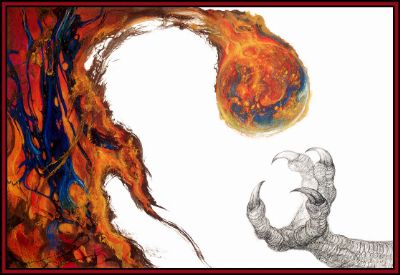 In creation myths, incubation or sexual intercourse between a mortal female and a dragon-god (who embodies fertility) gives birth to a hero who will be the first of its people .

Defeating the dragon in some stories allows regeneration of the land, of the seasons, of relationships and whole countries. The killing of a dragon not only deliver the place from his nuisances but is often the first stone of a new city. Like Cadmos seeding on the ground of the future city of Thebes the teeth of the dragon he killed, the hero turns the death of the dragon into positive forces .

The following is a detailed list of the cosmical fights between the hero and the dragon. In the case of Egypt, Seth is first a hero then became a beast.

St Michael the Beast of the Apocalypse