At the edges of the known world of the medieval mappaemundi were supposed to live monstrous races described by travelers and soldiers that dared to adventure so far away.

Among well and less known eclectic creatures such as the Giants, the Pygmies, the Panotii (had giant ears), the Astomi (no mouths), the Anthropophagi (cannibals), the Amazons …, were the Cynocephali, or Dog-heads. They had the body of a man and the head of a dog.

According to Pliny, they lived in the mountains of India and barked to communicate. They lived in caves and wore animal skins. They hunted very successfully and used javelins, bows and swords. Other sources that circulated in the Middle Ages, such as the account of Alexander the Great adventures in India picture the Cynocephali much more frightening, — with enormous teeth and breathing fire. Several sources make them cannibals. All sources emphasize that they combine the natures of man and beast.

During the later half of the ninth century, a monk from Brittany, by the name of Ratramnus, wrote an epistle concerning the Cynocephali, dealing with the subject of whether they were to be considered human and if they could be baptized. His conclusion being they could indeed be baptized, though their race should generally be classified as less than human, despite their being descendants of Adam.

And the belief of the Cynocephali remained in circulation for several hundred more years. It eventually mutated, through retelling and trials, to the great werewolf scares in the 1600s. 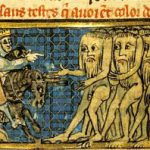