The Demon Drummer of Tedworth is a famous supernatural story told by Joseph Glanvill in his Sadducismus Triumphatus.

In 1668, Glanvill published Sadducismus Triumphatus, Latin for The Defeat of Sadducism, meant as A Blow at Modern Sadducism … To which is added, The Relation of the Fam’d Disturbance by the Drummer, in the House of Mr. John Mompesson. By Sadducism, Glanvill meant something close to modern scepticism, the deliberate denial of the supernatural.

The tale Glanvill told was that a local landowner, John Mompesson, owner of a house in the town of Tedworth, had brought a lawsuit against a local drummer, whom he accused of extorting money by false pretences. After he had won judgment against the drummer and confiscated his drum, he found his house plagued by nocturnal drumming noises. It was assumed that the drummer had brought these plagues of noise upon Mompesson’s head by witchcraft. The story is considered by some to be an early account of the activity of a poltergeist, a mischievous spirit that makes noises unexplainable except by supernatural causes. 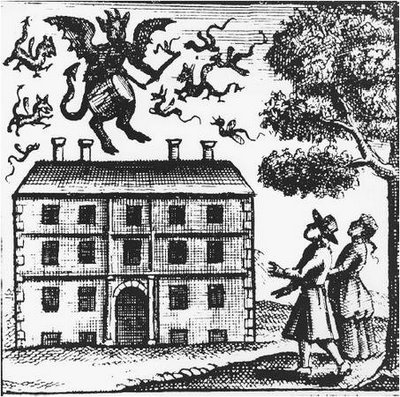 Charles Mackay, in his Extraordinary Popular Delusions and the Madness of Crowds (1841), considers the entire story a hoax, and gives the following account:

"Quite as extraordinary and as cleverly managed was the trick played off at Tedworth, in 1661, at the house of Mr. Mompesson, and which is so circumstantially narrated by the Rev. Joseph Glanvil, under the title of "The Demon of Tedworth," and appended, among other proofs of witchcraft, to his noted work, called "Sadducismus Triumphatus." About the middle of April, in the year above mentioned, Mr. Mompesson, having returned to his house, at Tedworth, from a journey he had taken to London, was informed by his wife, that during his absence they had been troubled with the most extraordinary noises. Three nights afterwards he heard the noise himself; and it appeared to him to be that of "a great knocking at his doors, and on the outside of his walls." He immediately arose, dressed himself, took down a pair of pistols, and walked valiantly forth to discover the disturber, under the impression that it must be a robber: but, as he went, the noise seemed to travel before or behind him; and, when he arrived at the door from which he thought it proceeded, he saw nothing, but still heard "a strange hollow sound." He puzzled his brains for a long time, and searched every corner of the house; but, discovering nothing, he went to bed again. He was no sooner snug under the clothes, than the noise began again more furiously than ever, sounding very much like a "thumping and drumming on the top of his house, and then by degrees going off into the air."

These things continued for several nights, when it came to the recollection of Mr. Mompesson that some time before, he had given orders for the arrest and imprisonment of a wandering drummer, who went about the country with a large drum, disturbing quiet people and soliciting alms, and that he had detained the man’s drum, and that, probably, the drummer was a wizard, and had sent evil spirits to haunt his house, to be revenged of him. He became strengthened in his opinion every day, especially when the noises assumed, to his fancy, a resemblance to the beating of a drum, "like that at the breaking up of a guard." Mrs. Mompesson being brought to bed, the devil, or the drummer, very kindly and considerately refrained from making the usual riot; but, as soon as she recovered strength, began again "in a ruder manner than before, following and vexing the young children, and beating their bedsteads with so much violence that every one expected they would fall in pieces." For an hour together, as the worthy Mr. Mompesson repeated to his wondering neighbours, this infernal drummer "would beat ‘Roundheads and Cuckolds," the ‘Tat-too,’ and several other points of war, as cleverly as any soldier." When this had lasted long enough, he changed his tactics, and scratched with his iron talons under the children’s bed. "On the 5th of November," says the Rev. Joseph Glanvil, "it made a mighty noise; and a servant, observing two boards in the children’s room seeming to move, he bid it give him one of them. Upon which the board came (nothing moving it, that he saw), within a yard of him. The man added, ‘Nay, let me have it in my hand ;’ upon which the spirit, devil, or drummer pushed it towards him so close, that he might touch it. "This," continues Glanvil, "was in the day-time, and was seen by a whole room full of people. That morning it left a sulphureous smell behind it, which was very offensive. At night the minister, one Mr. Cragg, and several of the neighhours, came to the house, on a visit. Mr. Cragg went to prayers with them, kneeling at the children’s bedside, where it then became very troublesome and loud. During prayer time, the spirit withdrew into the cock-loft, but returned as soon as prayers were done; and then, in sight of the company, the chairs walked about the room of themselves, the children’s shoes were hurled over their heads, and every loose thing moved about the chamber. At the same time, a bed-staff was thrown at the minister, which hit him on the leg, but so favourably, that a lock of wool could not have fallen more softly." On another occasion, the blacksmith of the village, a fellow who cared neither for ghost nor devil, slept with John, the footman, that he also might hear the disturbances, and be cured of his incredulity, when there "came a noise in the room, as if one had been shoeing a horse, and somewhat came, as it were, with a pair of pincers," snipping and snapping at the poor blacksmith’s nose the greater part of the night. Next day it came, panting like a dog out of breath; upon which some woman present took a bed-staff to knock at it, "which was caught suddenly out of her hand, and thrown away; and company coming up, the room was presently filled with a bloomy noisome smell, and was very hot, though without fire, in a very sharp and severe winter. It continued in the bed, panting and scratching for an hour and a half, and then went into the next room, where it knocked a little, and seemed to rattle a chain."

The rumour of these wonderful occurrences soon spread all over the country, and people from far and near flocked to the haunted house of Tedworth, to believe or doubt, as their natures led them, but all filled with intense curiosity. It appears, too, that the fame of these events reached the royal ear, and that some gentlemen were sent by the King to investigate the circumstances, and draw up a report of what they saw or heard. Whether the royal commissioners were more sensible men than the neighbours of Mr. Mompesson, and required more clear and positive evidence than they, or whether the powers with which they were armed to punish anybody who might be found carrying on this deception, frightened the evil-doers, is not certain; but Glanvil himself reluctantly confesses, that all the time they were in the house, the noises ceased, and nothing was heard or seen. "However," says he, "as to the quiet of the house when the courtiers were there, the intermission may have been accidental, or perhaps the demon was not willing to give so public a testimony of those transactions which might possibly convince those who, he had rather, should continue in unbelief of his existence."

As soon as the royal commissioners took their departure, the infernal drummer re-commenced his antics, and hundreds of persons were daily present to hear and wonder. Mr. Mompesson’s servant was so fortunate as not only to hear, but to see this pertinacious demon; for it came and stood at the foot of his bed. "The exact shape and proportion of it he could not discover; but he saw a great body, with two red and glaring eyes, which, for some time, were fixed steadily on him, and at length disappeared." Innumerable were the antics it played. Once it purred like a cat; beat the children’s legs black and blue; put a long spike into Mr. Mompesson’s bed, and a knife into his mother’s; filled the porrengers with ashes; hid a Bible under the grate; and turned the money black in people’s pockets. "One night," said Mr. Mompesson, in a letter to Mr. Glanvil, "there were seven or eight of these devils in the shape of men, who, as soon as a gun was fired, would shuffle away into an arbour;" a circumstance which might have convinced Mr. Mompesson of the mortal nature of his persecutors, if he had not been of the number of those worse than blind, who shut their eyes and refuse to see.

In the mean time the drummer, the supposed cause of all the mischief, passed his time in Gloucester gaol, whither he had been committed as a rogue and a vagabond. Being visited one day by some person from the neighbourhood of Tedworth, he asked what was the news in Wiltshire, and whether people did not talk a great deal about a drumming in a gentleman’s house there? The visiter replied, that he heard of nothing else; upon which the drummer observed, "I have done it; I have thus plagued him; and he shall never be quiet until he hath made me satisfaction for taking away my drum." No doubt the fellow, who seems to have been a gipsy, spoke the truth, and that the gang of which he was a member knew more about the noises at Mr. Mompesson’s house than anybody else. Upon these words, however, he was brought to trial at Salisbury, for witchcraft; and, being found guilty, was sentenced to transportation; a sentence which, for its leniency, excited no little wonder in that age, when such an accusation, whether proved or not, generally insured the stake or the gibbet. Glanvil says, that the noises ceased immediately the drummer was sent beyond the seas; but that, some how or other, he managed to return from transportation; "by raising storms and affrighting the seamen, it was said;" when the disturbances were forthwith renewed, and continued at intervals for several years. Certainly, if the confederates of this roving gipsy were so pertinacious in tormenting poor weak Mr. Mompesson, their pertinacity is a most extraordinary instance of what revenge is capable of. It was believed by many, at the time, that Mr. Mompesson himself was privy to the whole matter, and permitted and encouraged these tricks in his house for the sake of notoriety; but it seems more probable that the gipsies were the real delinquents, and that Mr. Mompesson was as much alarmed and bewildered as his credulous neighhours, whose excited imaginations conjured up no small portion of these stories,

"Which rolled, and as they rolled, grew larger every hour."