Ebirah or the ‘Sea Monster‘, is a giant shrimp-like kaiju that first appeared in the Showa Godzilla film Godzilla vs. the Sea Monster (Ebirah, Horror of the Deep (1966)). 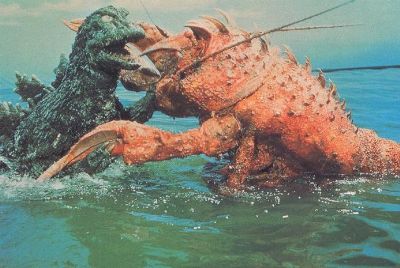 Probably a radiation mutated life-form of a crustacean living in the shallows off the South Seas island. Ebirah was used by the Red Bamboo Sect to keep their slave laborers from escaping . Description Special weapons Ebirah uses his powerful claws or pincers (one being a "crushing" claw and the other being a "slicing" claw), his tough exoskeletal armor and his swimming ability.

In Godzilla vs. the Sea Monster, a terrorist organization called the Red Bamboo had set up a base of operations on Letchi Island. The giant shrimp Ebirah was successfully used to destroy any ship that came too close to the island. The Red Bamboo ships used a special extract from the island’s fruit to protect themselves from Ebirah.

When a small group of people stranded on the island saw the mutant dinosaur Godzilla sleeping in a cave, they woke him so he could fight Ebirah. Godzilla easily won and injured the crustacean with his atomic ray. The day after, a Red Bamboo ship appeared, but they unknowingly used a placebo and not the fruit extract. Ebirah attacked and tore the ship apart. Godzilla reappeared, but this time, Godzilla pulled off Ebirah’s claws.

The wounded Ebirah then fled. Ebirah was not seen again until he appeared on Monster Island in Ichiro’s dreams in All Monsters Attack. His appearance in this film is simply stock footage utilized from Godzilla vs. the Sea Monster. In the Millennium era, Ebirah makes an appearance in Godzilla: Final Wars as one of the many controlled monsters of the Xiliens, a race of extraterrestrial beings. He destroys a factory near Tokyo, and the military forces are sent to destroy him, but are outmatched by the immense crustacean.

Instead, the mutant soldiers are called to stop the kaiju. The mutants successfully defeat Ebirah and are about to kill him, when he disappears in a flash of light. The Xiliens arrive and say that they destroyed the monsters to save Earth. However, it is soon found out that the monsters were in fact controlled by the Xiliens all along.

The Gotengo then frees Godzilla from the Antarctic so he could fight the controlled kaiju. The plan is a success and Godzilla successfully defeats all of the kaiju. When he arrives in Tokyo Bay, he faces Ebirah and the smog monster Hedorah. However, they are no match for Godzilla, who blasts them out of the water with his atomic ray and the duo crash into a building, where Ebirah’s claw stabs Hedorah’s eye. Godzilla fires another blast and knocks out both Ebirah and Hedorah.