The basic concept of an elemental refers to the ancient idea of elements as fundamental building blocks of nature. In the system prevailing in the Classical world, there were four elements: fire, earth, air, and water. This paradigm was highly influential in Medieval natural philosophy and alchemy.

In the 16th century, Paracelsus, in his alchemical works first classified mythological beings as elementals.

Most of these beings are found in folklore as well as alchemy; their names are often used interchangeably with similar beings from folklore. The sylph, however, is rarely encountered outside of alchemical contexts and fan media. To this day, many people still work with Elementals, those working in Witchcraft and other Nature Beliefs.

The air element, featured by intelligence, represented by Spring and Dawn is inhabited by Sylphs in the form of butterflies. They control winds, help birds in their migrations and flowers in their pollination. Their light yellow- toned translucent appearance is present in the scent of wet herb threatening to rain.

The water element featured by love and cures, represented by Autumn and Sunset, is inhabited by nymphs, mermaids, nereids, and undines. They appear as mythological creatures in all liquids, such as seas, rivers, fresh water brooks, falls, and clouds. Their aspect vary depending on their habitat. Nereids rule the seas; undines called Naiads by the Greek, are found in lakes. They are mostly blue and a receptive energy. Like mermaids, they attract any sailor with their songs until they wreck. They are the ones channeling natural river beds.

The Earth element is the most dense. It is represented by Winter and the night. It is inhabited by Ladies, goblins, gnomes, and trolls. They are mostly green, and have a receptive energy. Fairies or ladies are characterized by their kindness and for being the oldest inhabitants of the plant. They may either be imposing or tiny; their powers, however, are incredible and dominate nature.

The Fire element features both creation and destruction. It is represented by Summer, and daylight. It is inhabited by Salamanders, Farralis and Ra-Arus, appearing as reddish salamanders and dragons. They give the idea that with courage and imagination everything can be done. They send forth projective energy, and dominate the element. No fire would be ignited without their intervention.

Since these elementary beings are earth spirits, they preferably work the soil and tree roots, to which they grant power. They look like funny little old men, as they belong to a race coming from the beginning of times. It is said that they inhabited the lost Atlantis. These tiny creatures build their homes under aging trees. They only go out at night and their home is lively after sunset. They are friends of animals, they speak their same language and protect them from danger. The best feasts are when the freezing winds blow over the woods dancing and playing, they start to run and some prefer rain for their dances. 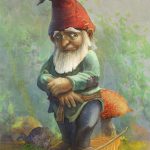 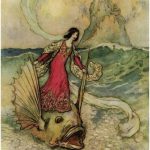