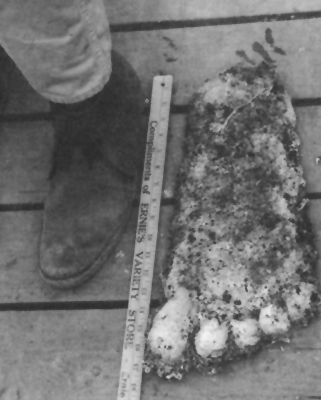 The existence of bigfoot remains subject to discuss difficult without any scientific rigor and strong evidences or testimonies by several accredited witnesses to validate any of the so-called “proofs” that have been submitted so far. All the films, pictures, moulds, artefacts and even bones could be only the result of misinterpretation or forgery.

Concerning the tracks, it is difficult for scientists to have any certitude from photographs or casts. Even onsite, the tracks in snow, melted by the sun, can change shape and grow larger in such a way it has been suggested that the footprints and sightings of yeti were that of snow leopards, foxes, bears, monkeys. This theory doesn’t hold when the tracks are clearly that of a biped as both all these animals normally move on all four feet (but who is sure that they have not been printed by hand ?).

In a 1996 USA Today article titled "Bigfoot Merely Amuses Most Scientists", Washington State zoologist John Crane is quoted as saying: "There is no such thing as Bigfoot. No data other than material that’s clearly been fabricated has ever been presented."

In addition to the lack of evidence, scientists cite the fact that Bigfoot is alleged to live in regions unusual for a large, nonhuman primate, i.e., temperate latitudes in the northern hemisphere; all recognized nonhuman apes are found in the tropics of Africa and Asia. Thus, as with other proposed megafauna cryptids, climate and food supply issues would make such a creature’s survival in reported habitats unlikely. Furthermore, great apes are not found in the fossil record in the Americas, and no Bigfoot remains have ever been found. Indeed, scientists insist that the breeding population of such an animal would be so large that it would account for many more purported sightings than currently occur, making the existence of such an animal an almost certain impossibility.

A few scientists have offered varying degrees of support for Bigfoot study and beliefs. Field biologist George Shaller has spoken in favor of greater study of Bigfoot evidence while still expressing skepticism towards the possibility of its existence. Similarly, Napier has argued that some "soft evidence" is compelling enough that he advises against "dismissing its reality out of hand." Other scientists who have expressed guarded interest in Sasquatch reports include Russell Mittermeier, Daris Swindler, and Esteban Sarmiento. Jane Goodall, in a 2002 interview, expressed her personal hope of the existence of Bigfoot, but allowed that there is no concrete evidence for the creature. Anthropologist Carleton S. Coon, whose theories on the evolution of race in humans have been largely discredited, also expressed support for Bigfoot’s existence in a posthumously published essay.

The situation is similar with its cousin from the Himalayan mountains. Yeti reports usually come in the form of tracks found, pelts offered, shapes seen at a distance, but rarely, actual face-to-face encounters with the creatures. Face to face encounters never come with researchers looking for the Yeti, but with locals who stumble into the creature during their daily lives.

Many Western writers are suspicious of the Sherpa accounts of Yeti sightings "because of their vagueness as to time and place, the obvious garnish of common folklore themes, and motivation derived from the animalistic philosophy of Tibetan Buddism." Furthermore, many of the sightings occurred in blizzard conditions or from far distances, suggesting that the people that spotted them may have been mistaken. 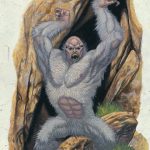