The measures employed against alleged witches were some of the worst ever to be legally sanctioned in the Western world. The sentence generally was death (as Exodus 22:18 states, “Thou shalt not suffer a witch to live”). There were other sentences, the most common to be chained for years to the oars of a ship, or excommunicated then imprisoned.

The frequent use of ‘swimming’ to test innocence/guilt means that an unknown number also drowned more or less accidentally prior to conviction.

The most common methods used to execute alleged witches were burning and hanging.

Burning at the stake was common on the Continent as a penalty for heresy but only a in few cases were the alleged witches still alive while the stake was set on fire. The garrote was sometimes used in England to execute religious heretics before they were burned at the stake.

In England it was common to hang the person first and then burn the corpse, a practice adopted sometimes in other countries (in many cases the hanging was replaced by strangling). Drowning was sometimes used as a means of execution. 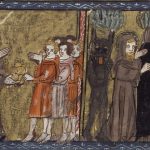