Extraterrestrial life (from the Latin words: extra (“beyond”, or “not of”) and terrestris (“of or belonging to Earth”)) is defined as life that does not originate from Earth. Hypothetical forms of extraterrestrial life range from simple bacteria-like organisms to sapient beings far more advanced than humans. It is currently unknown whether any such forms of life exist or ever existed.

The development and testing of theories about extraterrestrial life is known as exobiology or astrobiology; the term astrobiology, however, is the scientific study of life on Earth and in the universe.  Astrobiology combines the disciplines of biology, chemistry, physics, geology and astronomy. Astrobiologists seek to understand (among other things) how life arose and evolved on Earth, what governs the way life is organized and what makes a planet habitable.

“Exopolitics is the study of the key individuals, institutions and political processes associated with extraterrrestrial life.” from Dr. Michael Salla’s website, http://www.exopolitics.org/ . Exopolitics seeks to research and explore the realm of extraterrestrial life as it relates to humanity, politically, socially, culturally and very likely, economically.

A UFO is an Unidentified Flying Object.

Since man first started looking up into the skies he saw things he couldn’t explain. For the last fifty years or so these things have taken on the label “UFOs.” Originally an abbreviation for the Air Force term “Unidentified Flying Object”, it has become a synonym to most people for “Alien Spaceship.” For the Air Force, though, it is simply a term to refer to something in the skies that the observer can see but not recognize. A UFO is the reported sighting of a flying object or light seen in the sky, water or on land, whose appearance, trajectory, actions, motions, lights, and colors do not have a logical, conventional, or natural explanation, and which cannot be explained, not only by the original witness, but by scientists or technical experts who try to make a common sense identification after examining the evidence.

The astronomer and UFO researcher J. Allen Hynek defined a UFO as:

­The reported perception of an object or light seen in the sky or upon the land the appearance, trajectory, and general dynamic and luminescent behavior of which do not suggest a logical, conventional explanation and which is not only mystifying to the original percipients but remains unidentified after close scrutiny of all available evidence by persons who are technically capable of making a common sense identification, if one is possible.

A UFO is the stimulus for a UFO report made by a UFO witness.  UFO researchers (often called UFOlogists) study UFO reports and witnesses. UFO researchers cannot directly study UFOs.  There are some reports in the literature of different governments recovering craft thought to cause UFO reports, but most of these reports are speculative. The study of UFO reports is referred to as UFOlogy. This implies a scientific basis to the study, when in practice very little scientific research is carried out. After careful investigation about 90% of all UFO reports can be reasonably explained as either natural phenomena or misidentification of normal manmade devices.

In the early days of investigation the term ‘Flying Saucer’ was used interchangeably. More recently the term Flying Saucer has fallen into disuse, although some researchers use it as a term to specifically refer to an extraterrestrial spacecraft.

Sometimes the term IFO is used for these Identified Flying Objects. In essence, it is a natural or man-made object that people reported as a UFO. About 90%-95% of all UFO reports prove to be IFOs, after an examination of the evidence by a trained investigator. People report natural or conventional objects as UFOs because they do not recognize them as such, due to unusual environmental conditions, ignorance, or the rarity of a natural event. For example, people have reported the planet Venus as a UFO, unaware of how bright the planet can appear at certain times of the year. Stars near the horizon are sometimes reported as UFOs because atmospheric turbulence and thermals (columns of warm air) cause them to twinkle rapidly in red and blue colors. Stars may also appear to dart back and forth because of autokinesis. This is a psychological phenomenon in which a person’s eye movements create the illusion that a bright object seen in the dark without a frame of reference is moving.

In order to distinguish between UFOs and IFOs, an investigator must find as much information about a sighting as possible, without leading witnesses into giving false details. It is also important that UFO reports are investigated soon after the sighting, so all relevant information about possible IFO explanations can be considered.

A close encounter is an event in which a person witnesses an unidentified flying object. A system of classification was introduced by astronomer and UFO researcher J. Allen Hynek, in his 1972 book The UFO Experience: A Scientific Inquiry.

Sightings more than 500 feet (160 m) from the witness are classified as Daylight Discs, Nocturnal Lights, or Radar/Visual Reports. Sightings within about 500 feet are subclassified as various types of close encounter. Hynek and others argued a claimed close encounter must occur within about 500 feet to greatly reduce or eliminate the possibility of misidentifying conventional aircraft or other known phenomena. 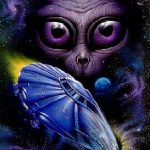