Faeries are known to live longer than men. Some even says they are eternal but we do not even know if immortality is the privilege of the gods. The length of time may vary between 100 and 3000 years according to the various species. The Goblins for instance live between 300 and 400 years. Again, time is different in Faerieland and we should assume that these figures only qualify Faeries who live on Earthland.

The silent people as they are called are not only noiseless but almost invisible. They conceal from our sight through the use of charms and potions. Nearly every fairy has the power of invisibility in some form or another. Some fairies may become visible or invisible at will. Others may only be visible by night, and some only by the light of the noonday.

Men know the Fairies have visited their houses only by the mysterious disappearance of the substance of their goods, or the sudden and unaccountable death of any of the inmates or of the cattle. When driven away they do not go off with tramp and noise, and sounds of walking such as men make, or melt into thin air, as spirits do, but fly away noiselessly like birds or hunted deer. They seem to glide and float along rather than to walk. Sometimes indeed the elves make a rustling noise like that of a gust of wind, or a silk gown, or a sword drawn sharply through the air, and their coming and going has been even indicated by frightful and unearthly shrieks, a pattering as of a flock of sheep, or the louder trampling of a troop of horses. Generally, however, their presence is indicated at most by the cloud of dust raised by the eddy wind, or by some other curious natural phenomenon, by the illumination of their music instruments, songs, or speech.

The faet fiada was one of the gifts given to the Tuatha de Danann by Manannan. It gave them to power to become invisible to mortal eyes, in order to protect them from the Milesians. This is the source of the power of invisibility that all of the daoine sidhe have.

People with the Second Sight are able to see the fairies, though the fairies are invisible to all others. Most of the time, those with the second sight are born with their ability. For instance, the seventh son of a seventh son almost always has such power. Othertimes the power is gained by the application of fairy ointment.

When Faeries leave home in companies, they travel in eddies of wind. On calm summer days, if one sees a kind of cloud of dust that moves in the sky without any breath of air then it should be assumed that a pack of Fairies with their takings is going back to Fairyland.
By throwing one’s left shoe at it, the Fairies are made to drop whatever they may be taking away, men, women, children, or animals. The same result is attained by throwing one’s bonnet, saying, `this is yours, that’s mine’ or a naked knife, or earth from a mole-hill.
People that have been `lifted’, and embarked in these eddies usually do not remember any detail about their journey. Some have been carried to some inaccessible place to which they could never have made their way alone, on the top of a distant hill or from one island to another.

Power over plants and animals

Faeries, wether they live underwater, in the forest or ontop of mountains have sustained long relationships with the wild animals of their realm. They talk the language of animals which obey straightforward and help them in various tasks. There are many reports of lutins riding a fox or a dear across the forest. In the air, the elves may ask any bird to transport them across long distances.

The Defects of Fairies

Generally the Faerie carry some personal defect, by which they become known to be of no mortal race. Vampires, witches and werewolves were also afflicted in their human form by some sign that allow to recognize them. Melusine, the famous fay had several children with Raymond Lusignan, a mortal nobleman. All became kings but had some monstrous sign on their face. Geoffroy was called “the big tooth”.
The Bean Shiih was detected by her extraordinary voracity (a cow at a meal), a frightful front tooth, the entire want of a nostril, a web foot, praternaturally long breasts, etc. She is also said to be unable to suckle her own children, and hence the Fairy desire to steal nursing women. 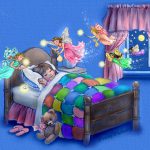