Yu was the founder of the Xia dynasty. The five claws dragon became the exclusive emblem of the emperor. Members of his court wear a four-clawed one. If someone other than the Emperor was caught wearing the symbol of the five-clawed dragon, he was put to death.

The first chinese dragons had only three claws. The Celestial Dragon is the ruler of the Chinese dragons. He has five claws curling from its feet, 117 scales among which, 81 infused with yang, the good, and 36 infused with yin, the evil.

Great Chien-Tang is the commander of all the River Dragons, he is blood red, has a firey mane, and is 900 feet long.

Long hold a shining pearl between his claws which represents moon, fertility and wisdom. Other dragons hide it in under their throat or chin.

Ying Long is a winged a dragon covered with fur. 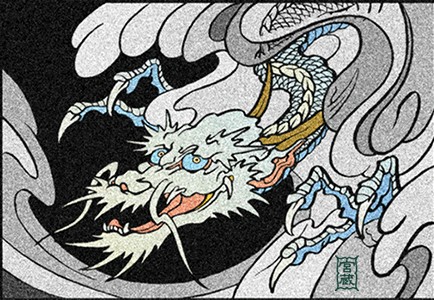 Each of the brothers rule one of the four seas. Earth is in the centre of these seas. They each live in an underwater palace called the Crystal Palace. Also in the palace are their ministers, army (of fish, crabs, and crayfish) and watchmen who police the sea bottom. They depend directly on the August Personage of Jade, from whom they receive the orders of how much rain to distribute where.

Though there are four high Dragon King’s there are many local ones. The local Dragon Kings were much more respected. As Dragon Kings are masters of water, every well and watercourse is guarded  by its very own Dragon King, represented by a statue. They are resorted to when there is too much or too little rain. If a request is granted then there is a celebration to honour the Dragon King.