Carvings of this unidentified animal, made by the ancient inhabitants of the Scottish Highlands some 1,500 years ago, are the earliest evidence that Loch Ness harbors a strange aquatic creature. 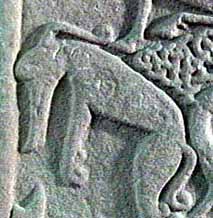 Alleged reference sources of the sixteenth century indicate the presence of a strange creature dwelling within the loch, often wreaking carnage and havoc among the local community.

In 565 AD St Columba, the Irishman celebrated for bringing Christianity to Scotland, was the first to have witnessed the monster when it attempted to take the life of a brother monk swimming in the River Ness.

The monster is said to have disappeared when St Columba made the sign of the cross and shouted out “Go no further, nor touch the man! Go back!”  ‘Vita Sancti Columbae’ (Adamnan).

In mythology, this tale is a classic of the great cosmic fight between Man and the evil forces often symbolized by a Dragon or a Snake. Many saints were associated with the sanity act against dragons (St Georges, St Marthe, …).

According to the Swedish naturalist and author Bengt Sjögren (1980), present day beliefs in lake monsters such as Nessie are associated with the old legends of kelpies. He claims that the accounts of loch monsters have changed over the ages, originally describing creatures with a horse-like appearance. Sjögren concludes that the kelpie legends have developed into current descriptions of lake monsters, reflecting modern awareness of plesiosaurs. 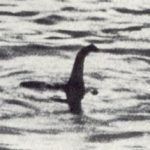 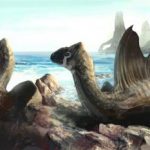