Forensic science (often shortened to forensics) is the application of a broad spectrum of sciences to answer questions of interest to the legal system. This may be in relation to a crime or to a civil action. The use of the term “forensics” in place of “forensic science” could be considered incorrect; the term “forensic” is effectively a synonym for “legal” or “related to courts” (from Latin, it means “before the forum”). However, it is now so closely associated with the scientific field that many dictionaries include the meaning given here.

Criminalistics is the application of various sciences to answer questions relating to examination and comparison of biological evidence, trace evidence, impression evidence (such as fingerprints, shoeprints, and tire tracks), controlled substances, firearms, and other evidence in criminal investigations.

Some of the forensic science disciplines are: 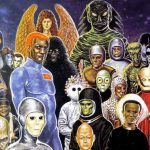