In Isaac Asimov’s robot novels, the Frankenstein complex is a colloquial term for the fear of robots. Asimov’s stories predict that the phobia will be widespread against machines that resemble people . It is similar in many respects to the uncanny valley hypothesis which was first coined in 1970 by Japanese roboticist Masahiro Mori .

If robots became more human-like, people would find them to be more acceptable and appealing than their mechanical counterparts.

The name derives from Victor Frankenstein in the book Frankenstein, or The Modern Prometheus by Mary Wollstonecraft Shelley. In Shelley’s story Victor Frankenstein creates an intelligent, superhuman being. He finds his creation horrifying to behold, and abandons him. This ultimately leads to Victor’s death at the conclusion of a vendetta between himself and his embittered creation. The creature is arguably the first real robot in literature, even though he’s completely organic.

Note the distinction between Frankenstein the creator and Frankenstein’s monster: a Frankenstein complex is not a fear of roboticists or mad scientists, but of artificial humans, although fear of one generally implies some fear of the other.

The general attitude of the public towards robots in much of Asimov’s fiction is fear and suspicion: ordinary people fear that robots will either replace them or dominate them. Although dominance is impossible under the Three Laws of Robotics, which state clearly that a robot may not harm a human being or, through inaction, allow a human being to come to harm, the fictitious public does not listen to logic, but rather to their fear. The Three Laws of Robotics were introduced quite clearly at the beginning of the film I, Robot, starring Will Smith. I, Robot is an example of the ‘Fear of Robots’ that Asimov described.

In Asimov’s robot novels, the Frankenstein Complex is a major problem for roboticists and robot manufacturers. They do all they can to calm the public and show that robots are harmless, sometimes even hiding the truth because the public would misunderstand it and take it to the extreme. The fear by the public and the response of the manufacturers is an example of the theme of paternalism, the dread of paternalism, and the conflicts that arise from it in Asimov’s fiction. 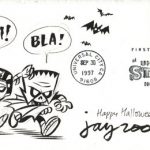 Frankenstein influence on art and society