Based on  the « Pistis Sofia », written by Philippe the Apostle  on Jesus’ order, the Gnostics dispensed with the infamous contradictions in mainstream Christian theodicy by dropping the assumption that the Ultimate God must also be the Ultimate Good.

Essentially, the Gnostics returned to polytheistic monism, but retained certain aspects of Christian doctrine, such as the perfection of Jesus as the Savior of mankind. The Lord was no longer connected with evil; in fact, he was not even the creator of the material world. Both of these unpleasant duties fell to inferior spiritual beings: the ignorant Demi Orgos or the evil archon (prince), Cosmocrator. In the following passage, Iranaeus, bishop of Lyons in the late second century, describes part of the complex mythology of Valentinus the Gnostic:

“They teach that the spirits of wickedness derive their origin from grief. Herein the devil, whom they also call Cosmocrator [ruler of the world], and the demons, and the angels, and every wicked spiritual being that exists found the source of their existence. They represent the Demiurge as being the son of that mother of theirs [Achamoth], and Cosmocrator as creature of the Demiurge. Cosmocrator has knowledge of what is above him, because he is a spirit of wickedness; but the Demiurge is ignorant of such things, inasmuch as he is merely animal.”

The Gnostics were obsessed with the problem of evil, and their greatest mystery, the God above the Lord, confronted it head-on. Like Yahweh, the Gnostic Abraxas was an ambivalent unity.

The difference between the two gods was in how they related to human morality. The Hebrew God was not subject to the same laws that man was; he could break his own commandments at will, but was never considered evil in the same way that people were. Abraxas, however, was a true coincidence of opposites , truly good, and yet evil.

Both the Lord Christ and the Devil were his creatures, manifestations of his paradoxical unity. He was an object of veneration, for he was feared, but the Gnostic’s worship was directed toward the loving Christ, who offered deliverance from the evil world of the Cosmocrator.

The main thrust of Gnostic teaching was that the individual soul must attain gnosis, self-knowledge, and to transcend the evil material world and commune with the Lord.

Influenced by Buddhist missionaries to the Nile delta city of Alexandria, Gnosticism was ruthlessly condemned and stamped out by the apostolic successors. Its mythological extravagances were perhaps cumbersome from a philosophical point of view, but they did breathe new life into an already monotonous faith.

Although nearly wiped out by Catholicism, the Gnostic system has exerted a strong influence on Western religion well into the 20th century. Driven underground, it has influenced many occult and religious systems such as alchemy, Kabbalistic mysticism, Rosicrucianism, and a host of other alternative spiritualities. Gnostic thought eventually resurfaced in the writings of the eminent depth psychologist, Dr. Carl Jung. In his famous poetic treatise of 1917, The Seven Sermons to the Dead, Jung outlined the figures of rooster-headed Abraxas, the good Lord, and the Devil and described a three stage development in the human perception of God.

The first stage was that God appears undifferentiated. The second stage is the perception of a benevolent Lord and an evil Devil in which each are separated to the point where the Devil is finally banished. The final stage is the integration of the Lord and the Devil. In his “The Seven Sermons to the Dead” he says:

“Abraxas is the Sun and also the eternally gaping abyss of emptiness, of the diminisher and dissembler, the Devil. .….Abraxas speaketh that hallowed and accursed word which is life and death at the same time. Abraxas begetteth truth and lying, good and evil, light and darkness in the same word and in the same act. Wherefore is Abraxas terrible.” 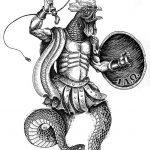