In 2004, Kiryu undergoes repair and modifications after its battle with Godzilla one year earlier. However, the Shobijin warn the Japanese government that Godzilla continues returning to the country because they used the original Godzilla’s skeleton in Kiryu’s construction. If they return the bones to the sea, Mothra will take Kiryu’s place in defending Japan. Due to Mothra attacking Japan in 1961, Prime Minister Hayato Igarashi refuses, but agrees to discontinue Kiryu once it kills Godzilla. Godzilla and Mothra fight, but the former has the upper hand. With the repairs finished, Kiryu joins the fray, but Godzilla knocks both it and Mothra out.

Meanwhile, on Infant Island, twin Mothra larvae hatch from Mothra’s egg and rush to help their mother. As lead scientist Yoshito Chujo heads in to repair Kiryu from its internal backup cockpit, the Japan Xenomorph Self-Defense Forces (JXSDF) and larvae try to hold Godzilla off, but Mothra sacrifices herself to protect the latter from Godzilla’s atomic breath. Concurrently, Yoshito finishes repairing Kiryu, allowing it to weaken Godzilla. As the larvae bind Godzilla in silk and Kiryu’s remote pilot, Kyosuke Akiba, receives the order to destroy Godzilla, Kiryu’s spirit is reawakened by Godzilla’s roar. The cyborg lifts Godzilla, uses its boosters to carry them both out to sea, and turns over to let Chujo escape before it plunges into the ocean.

In a post-credits scene, an undisclosed laboratory is shown with canisters containing the DNA of numerous kaiju. In the Japanese version, an unidentified voice announces that a “bio-formation” experiment involving an “extinct subject” is about to take place. Additionally in the Japanese version, Godzilla and Kiryu land at the bottom of the ocean, where the former awakens and roars. 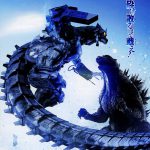