In 1991, science fiction writer Kenichiro Terasawa is writing a book about Godzilla and learns of a group of Japanese soldiers stationed on Lagos Island during the Gilbert and Marshall Islands campaign. In February 1944, while threatened by American soldiers, the Japanese soldiers were saved by a mysterious dinosaur. He theorizes that the dinosaur was subsequently mutated into Godzilla in 1954 after a hydrogen bomb test on the island. Yasuaki Shindo, a wealthy businessman who commanded the Japanese soldiers on Lagos Island, confirms that the dinosaur did indeed exist.

Meanwhile, a UFO lands on Mount Fuji. When the Japanese army investigates, they are greeted by Wilson, Grenchiko, Emmy Kano, and the android M-11. The visitors, known as the “Futurians”, explain that they are humans from the year 2303, where Godzilla has completely destroyed Japan. The Futurians plan to travel back in time to 1944 and remove the dinosaur from Lagos Island before the island is irradiated in 1954, thus preventing the mutation of the creature into Godzilla. As proof of their story, Emmy presents a copy of Terasawa’s book, which has not yet been completed in the present.

The Futurians, Terasawa, Miki Saegusa, and Professor Mazaki, board a time shuttle and travel back to 1944 to Lagos Island. There, as American forces land and engage the Japanese forces commanded by Shindo, the dinosaur attacks and kills the American soldiers. The American navy then bombs the dinosaur from the sea and gravely wounds it. After Shindo and his men leave the island, M-11 teleports the dinosaur from Lagos Island to the Bering Strait. Before returning to 1991, the Futurians secretly leave three small creatures called Dorats on Lagos Island, which are exposed to radiation from the hydrogen bomb test in 1954 and merge to become King Ghidorah, which then appears in present-day Japan. After returning to 1991, the Futurians use King Ghidorah to subjugate Japan and issue an ultimatum, but Japan refuses to surrender.

Feeling sympathy for the Japanese people, Emmy reveals to Terasawa the truth behind the Futurians’ mission: in the future, Japan is an economic superpower that has surpassed the United States, Russia, and China. The Futurians traveled back in time in order to change history and prevent Japan’s future economic dominance by creating King Ghidorah and using it to destroy present-day Japan. At the same time, they also planned to erase Godzilla from history so that it would not pose a threat to their plans. After M-11 brings Emmy back to the UFO, she reprograms the android so it will help her.

Terasawa discovers that a Russian nuclear submarine sank in the Bering Strait in the 1970s and released enough radiation to mutate the dinosaur into Godzilla. Shindo plans to use his nuclear submarine to rejuvenate Godzilla. En route to the Bering Strait, Shindo’s submarine is destroyed by Godzilla, who absorbs its radiation and becomes larger and more powerful. Godzilla arrives in Japan and is met by King Ghidorah. They fight at equal strength, each immune to the other’s attacks. With M-11 and Terasawa’s aid, Emmy sabotages the UFO’s control over King Ghidorah, causing the three-headed monster to lose focus during the battle. Godzilla eventually ends the battle by blasting off Ghidorah’s middle head. Before sending King Ghidorah crashing into the ocean, Godzilla destroys the UFO, killing Wilson and Grenchiko before turning its attention on Tokyo, destroying the city and killing Shindo.

Emmy travels to the future with M-11 and returns to the present day with Mecha-King Ghidorah, a cybernetic version of King Ghidorah. The cybernetic Ghidorah blasts Godzilla with beams, which proves useless. Godzilla then counters by relentlessly blasting Ghidorah with its atomic breath before Ghidorah launches clamps to restrain Godzilla. Ghidorah carries Godzilla out of Japan, but Godzilla breaks from its restraints and causes Ghidorah to send both crashing into the ocean. Emmy then returns to the future but not before informing Terasawa that she is his descendant.

At the bottom of the ocean, Godzilla awakens and roars over Mecha-King Ghidorah’s remains before swimming away. 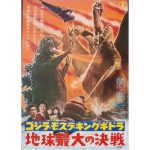 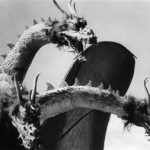 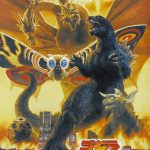