In Okinawa, an Azumi priestess has a vision of a city being destroyed by a giant monster. Meanwhile, Masahiko Shimizu discovers a type of metal not found on Earth while spelunking and takes it to Professor Miyajima for examination. An excavation led by Masahiko’s brother Keisuke uncovers a chamber filled with ancient artifacts and a mural bearing an ominous prophecy: “When a black mountain appears above the clouds, a huge monster will arise and try to destroy the world; but when the red moon sets and the sun rises in the west, two monsters shall appear to save the people.” Keisuke is joined by archaeologist Saeko Kaneshiro, who translates the prophecy and takes a statue bearing the likeness of Okinawa’s guardian monster King Caesar to study. Two men stalk them, with one claiming to be a reporter while the other attempts to steal the statue, but fails and flees.

Following the appearance of a black cloud resembling a mountain, Godzilla emerges from Mount Fuji and begins a destructive rampage despite having become tolerant of humans within the past years. Godzilla’s ally, Anguirus, confronts it, only to be nearly killed and forced to retreat. Keisuke arrives shortly after to check on Masahiko and Miyajima. Godzilla’s rampage continues until another Godzilla emerges and battles it. During the fight, the first Godzilla is revealed to be Mechagodzilla, a massive robot armed with advanced weaponry made of the same strange metal, later revealed to be space titanium. Godzilla is severely wounded, but inflicts some damage on Mechagodzilla before both monsters retreat. Miyajima hypothesizes, based on Mechagodzilla’s advanced technology and composition, that the robot is an alien superweapon.

Keisuke and Saeko take the statue back to the temple, but are confronted by the thief once again. During the fight, the skin on half of the stranger’s face melts away, revealing an ape-like visage. The intruder attempts to kill Keisuke, but a bullet from an unseen gunman kills him before Keisuke and Saeko catch a brief glimpse of the reporter. Concurrently, Godzilla arrives on Monster Island during a thunderstorm and is struck by lightning multiple times, reinvigorating itself.

Masahiko, Miyajima and his daughter Ikuko explore the cave where the space titanium was first found, but are captured by ape-like aliens from the Third Planet of the Black Hole, who plan to use Mechagodzilla to conquer Earth. Their leader, Kuronuma, forces Miyajima to repair the robot. While Saeko checks into a hotel and guards the statue, Keisuke leaves to meet Masahiko at the caves, only to encounter the reporter, who reveals his real name is Nanbara and that he is an Interpol agent who has been tracking the aliens. After Nanbara and Keisuke infiltrate the alien base and free the prisoners, Keisuke and Ikuko leave to pick up Saeko and the statue while Miyajima, Nanbara, and Masahiko stay behind, only to be recaptured by Kuronuma.

The next morning, a lunar eclipse results in a red moon and a mirage of the sun rising in the west. Seeing this, the team realizes they have to awaken King Caesar. They meet with the priestess and her grandfather and place the statue in the temple, revealing King Caesar’s resting place. As Kuronuma dispatches Mechagodzilla, the priestess sings to awaken King Caesar and Godzilla appears shortly afterward. The two monsters join forces to fight Mechagodzilla. When the robot tries to escape, Godzilla uses its stored electricity to create an electromagnetic field to attract Mechagodzilla before tearing off its head; causing it to explode. While the mortified aliens are distracted, Nanbara and the others free themselves, kill their captors, and sabotage the base, fleeing as it explodes. With the enemy defeated, Godzilla heads out to sea and King Caesar returns to his resting place while the humans rejoice. 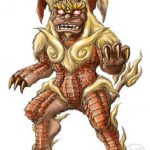