In the first part of 1971 (197X in the Japanese version), the most recent underground nuclear test, set off near the Aleutians, sends shockwaves as far across the globe as Monster Island in the South Pacific, severely damaging the island paradise and sending Rodan and Anguirus plummeting into the depths of the Earth, with Godzilla narrowly escaping the fissure which his friends tumbled into.

For years, Seatopia, an opulent undersea civilisation that resides in vast cities reminiscent of those of Ancient Greece and Rome, has existed in relative peace, ruled by Emperor Antonio, but nuclear tests in recent years have severely affected the cities via the earthquakes the tests produced. With the Seatopian capital badly affected by the most recent test, the Seatopians plan to unleash their civilization’s beetle-styled god, Megalon, to destroy the surface world out of vengeance.

On the surface, an inventor named Goro Ibuki, his little brother Rokuro, and Goro’s friend Hiroshi Jinkawa are off on an outing near a lake when Seatopia makes itself known to the Earth by drying up the lake the trio was relaxing nearby and using it as a base of operation. As they return home they are ambushed by agents of Seatopia who are trying to steal Jet Jaguar, a humanoid robot under construction by the trio of inventors. However the agents’ first attempt is botched and they are forced to flee to safety.

Some time later, Jet Jaguar is completed but the trio of inventors are knocked unconscious by the returning Seatopian agents. The agents’ plan is to use Jet Jaguar to guide and direct Megalon to destroy whatever city Seatopia commands him to do. Goro and Rokuro are sent to be killed, while Hiroshi is taken hostage. Megalon is finally released to the surface while Jet Jaguar is put under the control of the Seatopians and is used to guide Megalon to attack Tokyo with the Japan Self Defense Forces failing to defeat the monster. Eventually, the trio of heroes manage to escape their situation with the Seatopians and reunite to devise a plan to send Jet Jaguar to get Godzilla’s help using Jet Jaguar’s secondary control system.

After uniting with Japan’s Defense Force, Goro manages to regain control of Jet Jaguar and sends the robot to Monster Island to bring Godzilla to fight Megalon. Without a guide to control its actions, Megalon flails around relentlessly and aimlessly fighting with the Defense Force and destroying the outskirts of Tokyo. The Seatopians learn of Jet Jaguar’s turn and thus send out a distress call to their allies, the Space Hunter Nebula M aliens (from the previous film) to send the alien monster Gigan to assist their allies.

As Godzilla journeys to fight Megalon, Jet Jaguar starts acting on its own and ignoring commands to the surprise of its inventors, and grows to gigantic proportions to face Megalon himself until Godzilla arrives. The battle is roughly at a standstill between robot and cyborg, until Gigan arrives and both Megalon and Gigan double team against Jet Jaguar. Godzilla finally arrives to assist Jet Jaguar and the odds become even. After a long and brutal fight, Gigan and Megalon both retreat and Godzilla and Jet Jaguar shake hands on a job well done. Jet Jaguar bids Godzilla farewell and Godzilla returns to its home on Monster Island. Jet Jaguar turns back to its human size, and returns home with Goro and Rokuro. 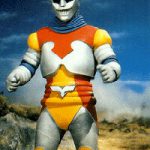