Guthrie Theater is a famous theater in Minneapolis, Minnesota. This old opera house turned theater is said to be haunted by the spirit of its former employee, Richard Miller. He attended the University of Minnesota while working at the theater as an usher part-time  but was something of a loner and a misfit. His many years of loneliness and despair came to an end in 1967. On Saturday, February 5, Miller walked to a local Sears store and purchased a Mauser pistol and shells. Then, he went to his car in the parking lot, put the gun to his head and pulled the trigger. He died instantly but his body was not discovered until the following Monday morning. When he was found he was still wearing his usher’s uniform from the Guthrie Theater.

Since that time many people and co-workers, actors, singers, and some of the cleaning staff have seen Miller walking very slowly up and down the aisle in row 18. He has also been seen walking along the catwalks, and also in a exclusive seating area called the Queen’s Box.The ghost will follow the witnesses with his eye’s or head but he never makes a sound. His body is known to be laid to rest at the Fort Snelling Cemetery.

The Guthrie Theater is located at 725 Vineland Place in Minneapolis, opposite the sculpture garden in the Loring Park area in the southwest part of the city. Richard Miller is buried at Fort Snelling National Cemetery. 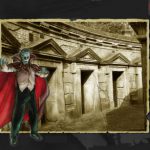