Hedorah, also known as the Smog Monster and Deathla, is an extraterrestrial kaiju formed from pollution from the 1971 film Godzilla vs. Hedorah. 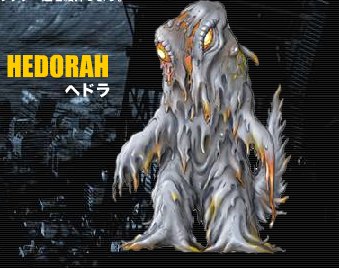 Hedorah came to earth as alien spore attached to a meteor whose path was close to Earth. The primitive creatures quickly mutated in contact with industrial waste and by gathering together the micro-organisms evolved through four stages of development into a gigantic form made of sludge that moves onto the land in search of more concentrated forms of pollution, spewing sulfuric acid mist and disintegrating every living thing unfortunate to be caught in its path. The creature is able to incarnate eitehr as a standing creature or a monstrous frisbee-like flying form, invulnerable to conventional attack because of its changing soft nature, Hedorah was eventually victim of dehydratation that dried its whole mass.

Hedorah was an alien life form that landed on Earth and began feeding on pollution. Hedorah’s actions soon gained the attention of Godzilla, who attacked the Smog Monster as he was feeding off of a smokestack. At the time, Hedorah was still in a young form, and was easily trounced by Godzilla. The two creatures had a series of battles across Japan, and Hedorah continued to grow bigger and stronger, and achieved a flying saucer-like form, allowing him to fly and spread sulfuric acid mist across Japan while destroying many factories. Hedorah and Godzilla had a final showdown near Mt. Fuji, in which Hedorah achieved his final form, a bipedal, humanoid pile of sludge.

Thanks to his acidic, poisonous body, as well as his lethal eye bolts, Hedorah very nearly put an end to Godzilla in their struggle. However, mankind had built a pair of gigantic electrodes near the warring kaiju with the intention of creating a superheated zone that would dry Hedorah out. During a period of the fight where Godzilla was knocked out, Hedorah was lured between the electrodes. Unfortunately, a fuse was blown, and the electrodes were useless.

Thankfully, Godzilla quickly came to the rescue again, using his breath to re-energize the electrodes. Badly dehydrated by their electricity, Hedorah tried to escape when in the film’s most famous moment, Godzilla used his atomic ray as a jet to propel himself through the air after the sludge monster whereupon he returned Hedorah to the electrodes to be dried out completely. Sensing still wet sludge within Hedorah’s husk, Godzilla proceeded to rip out Hedorah’s innards and then used the electrodes to finally slay the last remnants of the polluted monster.

In Godzilla: Final Wars, Hedorah, along with Ebirah, is seen being blasted out of Tokyo Harbor by Godzilla and crashing into a building, with one of Ebirah’s claws piercing one of Hedorah’s eyes. The Smog Monster and the Sea Monster are then knocked out by a blast of Godzilla’s atomic ray.
Godzilla proceeded to rip out Hedorah’s innards, then used the electrodes to fry them. Godzilla had finally slain the hellacious Smog Monster, but not without a price – he had lost one of his eyes, and his right hand was burnt down to the bone.

At the end of the movie, a picture of another Hedorah is seen in some water, with the caption ‘And yet another one?’, but no sequel to the film happened. 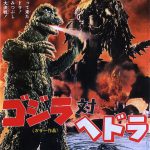