A serpent dragon who’s breath would generate plagues and disease. It was ashamed of nudity, so would flee in the presence of a nude person. 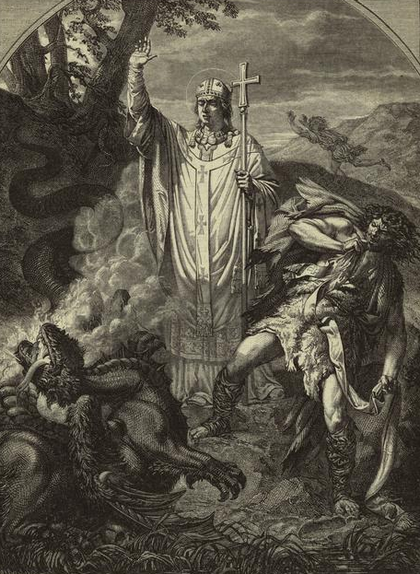 Around 520 AC a dragon which rose from the waters of the Seine ravaged the local area of Rouen in Normandy. It spouted a tremendous blast of water from its mouth which flooded the countryside. It was defeated by St. Romain of the city Rouen and a criminal who has just been condemned to death. As St Romain walk towards him and made the sign of the cross, the waters stopped pouring out from the monster which became docile and followed the two men to Rouen. The local people in fury eventually burned it. The prisoner was graced and set free and in remembrance the archbishop of Rouen was allowed to liberate one prisoner every year. The monster gave his name to the statues that were erected on the buildings to instill fear and collect the rain. The statues are known as gargoyles.

Long time ago a huge monster emerged from the sea and chose the river Rhone as its new home. It was a dragoness, half land mammal, half fish. She outsized twelve elephants, had teeth like swords and a skin like iron. Her father was the water dragon Leviathan, her mother the giant snake Onachus, and her name was Tarasque.

Wherever the beast appeared, she brought terror and destruction. All animals fled her. She destroyed houses, and her breath was flames. Many heroes tried to kill her, and perished.

After seven years of ravage a farmer found the skin of the dragoness and considered her dead. But the farmer had only found her cast-off skin and after seven years the monster came back. The Tarasque had destroyed all bridges and devoured everyone who wanted to cross the river. At last the inhabitants of the troubled area tried to lure the dragoness into a trap. Near the town Avignon there was a deep swamp. Whoever got there was lost. So they bound animals to trees near the trail leading to the swamp. The beast followed this line of prey. But when she approached the trap, she turned around and fled back to the river.

After 21 years, Saint Martha boat arrived at Saintes Marie de la Mer (a nearby port which was the departure of the first crusade and the place of a famous gipsy black virgin) . When she heard of the beast, she went out to Nerluc where the Tarasque was established. In her white dress, barefooted, and with no other weapon than a jar of holy water, St Martha caught the dragoness which followed her docile to the village where the local people killed her.

The citizens erected a new church in honor of St. Martha, and the town changed its name to Tarascon (in Provence). There is a procession every year at Pentecost to celebrate the event.

A water dragon which was banned from Noah Arch but eventualy survived had find refuge at La Ferté Bernard in France where it made havoc. It had a dragon head, a green round tortoised like body that cast spears and a long lethal tail. On top of that he naturally breathed fire. A man whose lover was eaten or captured by the monster cut his tail and killed it.