Exhibitions of living human oddities has been around in travelling fairs, circuses and taverns in England since the 1600s. These included so-called giants, dwarves, fat people, the very thin, conjoined twins and even people from exotic countries. Freak shows were a particularly popular form of entertainment during the Victorian period, when people from all classes gathered in amusemen,t fairs to get shocked and amazed.

Tom Norman, ‘The Silver King’, was the English counterpart of Barnum. He exhibited his performers in shop fronts, on his travelling fair or acted as an agent for the acts and booked them in venues such as the Panopticon in Glasgow and Nottingham. Norman started his career as a sideshow exhibitor in the 1870s when he managed Eliza Jenkins the Skeleton Woman, the Balloon Headed Baby and a whole range of freak show attractions. However, as he stated in his autobiography "you could indeed exhibit anything in those days. Yes anything from a needle to an anchor, a flea to an elephant, a bloater you could exhibit as a whale. It was not the show; it was the tale that you told." 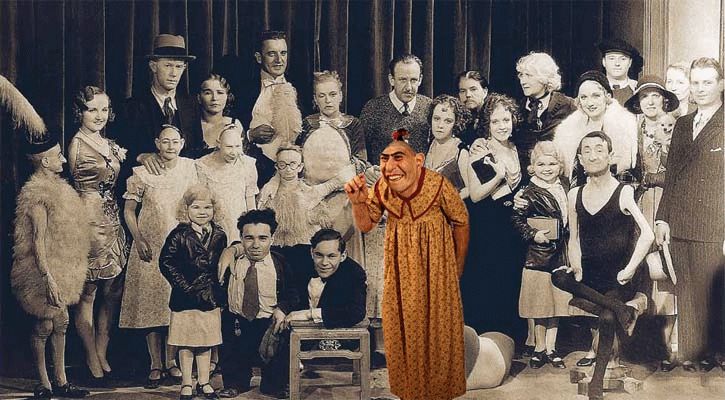 By 1883 Norman came into contact with Joseph Merrick the Elephant Man, perhaps one of the most famous exhibits of the time. Tom Norman’s career continued after the Elephant Man and over the next ten year he became involved with managing Mary Anne Bevan the World’s Ugliest Woman, John Chambers the Armless Carpenter and Leonine the Lion Faced Lady.

Freaks shows were also essential components of circus shows in America such as the Ringling Brothers Barnum and Bailey’s sideshow. These stars were immortalised in Todd Browning’s 1932 film Freaks, which featured Daisy and Violet Hilton, Johnny Eck, Prince Randian the Living Torso and Harry Earle the midget who falls in love with Cleopatra the trapeze artist. Living novelty acts continued on carnivals and midways in America and on the travelling fairs in the United Kingdom for most of the twentieth century.

Interest in sideshows declined as television made it easy (and free) to see the world’s most exotic attractions. In most civilized countries there are now enacted laws forbidding the public exhibition of monsters and revolting deformities. The performers often protested (to no avail) that they had no objection to the sideshow, especially since it provided not only a good income for them, but in many cases it provided their only possible job.

Where once there were 105 sideshows touring with circuses and carnivals across the United States, now there are just a handful. Displaying human oddities has now become a shameful business much as pornography. Changes in popular culture and entertainment, and changing attitudes about physical differences, led to the decline of the freak show as a form of entertainment. As previously mysterious anomalies were scientifically explained as genetic mutations or diseases, freaks became the objects of sympathy rather than fear or disdain. Only a few exemplars of the ten-in-one remains as well as a larger number of "Single O" attractions in tour carnivals. These are mostly faked and do not involve real human oddities.

Today the popularity of being the odd man out, tattoos, horrendous looking piercings and other self-made oddities has caused a new wave of freak show activity; most of it being presented on the internet. People are still curious and want to see others who are not considered the norm.