Monstrosities have attracted notice from the earliest time, and many of the ancient philosophers made references to them. Monsters possessed of two or more heads or double bodies are found in the legends and fairy tales of every nation. Hippocrates, his precursors, Enlpedocles and Democritus, and Pliny, Aristotle, and Galen, have all described monsters, although in extravagant and ridiculous language. Greek and Roman authors developed scientific, ethnographic, and cosmographic interpretations of “the monstrous” that remain influential until the end of the 17th century.

Ballantyne remarks that the occasional occurrence of double monsters was a fact known to the Hippocratic school, and is indicated by a passage in De morbis muliebribus, in which it is said that labor is gravely interfered with when the infant is dead or apoplectic or double. There is also a reference to monochorionic twins in the treatise De superfoetatione, in which it is stated that ” a woman, pregnant with twins, gives birth to them both at the same time, just as she has conceived them; the two infants are in a single chorion.”

Many reasons were given for the existence of monsters, and in the Middle Ages these were as faulty as the descriptions themselves. They were interpreted as divinations, and were cited as forebodings and examples of wrath, or even as glorifications of the Almighty. The semi-human creatures were invented or imagined, and cited as the results of bestiality. We find minute descriptions and portraits of these impossible results of wicked practices in many of the older medical books but without a semblance of scientific truth. Natural histories of the time had a genuinely encyclopedic scope in both coverage of subject and sources consulted. This desire to mention all the aspects of a plant or animal led the writers to include both mythical and real monstrous beings. Medical men, who were also trained in natural philosophy, were the main promoters and chroniclers of wonders. In Pliny the Elder’s ethnographic interpretation, monsters inhabited distant lands

Rhodiginus speaks of a monster in Italy with two heads and two bodies; Lycosthenes saw a double monster, both components of which slept at the same time ; he also says this creature took its food and drink simultaneously in its two mouths. Even Saint Augustine says that he knew of a child born in the Orient who, from the belly up, was in all parts double.

With the coming of Christianity, authors interpreted such phenomena as having been brought forth by God to communicate divine judgments. By the end of the Middle Ages, unusual natural occurrences were increasingly perceived as “wonders,” or “prodigies”, terms which all focused on their strange and exceptional character.  Wonders were seen as signs of God’s anger, or a sign of the power of nature, inspiring fear or admiration depending on the religious and political context.

During the 16th and 17th centuries, interest in the monstrous led to a deluge of literature about prodigies. In addition to the reprint of classical works on prodigies, a new genre appeared: the “prodigy book” facilitated by the invention and development of printing throughout Europe. Published in lavishly produced books, tales of the monstrous were written for the pleasure of wealthy audiences. The same prodigies and monsters were also depicted in “cheap print”: they were a cultural phenomenon shared by heterogeneous populations. In the 16th century, the Protestant reformers Luther and Melanchton substantially increased the presence of monsters in popular culture with the publication of a pamphlet depicting monstrous creatures as prophecies of the imminent ruin of the Roman Church.  Monsters were also depicted in broadsides, which reached more readers than any other type of text.  A crowd would gather around a broadside, displayed publicly and usually illustrated, as someone read it aloud. Thus, the broadside appealed to the illiterate as well as to the reading public through spoken word and image.

Renaissance natural philosophy combined the empirical study of the natural world i.e today’s biology, zoology, geology, and philosophical questions, such as whether Nature was independent of God.  From the late 14th century onward, there was a heightened desire to study nature and the unusual (due to increasing contact with distant countries), which led natural philosophers to pay significantly more attention to monstrous occurrences. Wonders of nature were characterized by their strangeness, as well as by their rarity, and were attributed to a variety of causes. In Les Observations, Belon, a French apothecary, described one of his trips to the eastern Mediterranean. He found the inhabitants exotic, but far from the fantastic beings described in Antiquity by Pliny the Elder. Partly due to the writings of medical men such as Cardano and Benivieni, wonders (including monstrous beings) were increasingly seen as part of the everyday world, rather than on the periphery of the unknown world. Likewise, illustrations of monsters began to change too.  Often represented in a naturalistic environment, the artist strove for increasing realism, reflective of the trend toward increasing detailed observation. The shift was not total: the same book could contain the older style of representing monstrous beings, as well as more modern, anatomical drawings of abnormalities

Scolars and thinkers continued to track the apparitions of monstrous beings. An illustration represents a monstrous head found in an egg, said to have been sent for examination to King Charles at Metz in 1569. It represented the face and visage of a man, with small living serpents taking the place of beard and hair. At this time were also reported double hermaphroditic terata, seemingly without latterday analogues. Rhodiginus speaks of a two-headed monster born in Ferrari, Italy, in 1540, well formed, and with two sets of genitals, one male and the other female. Paré gives a picture of twins, born near Heidelberg in 1486, which had double bodies joined back to back; one of the twins had the aspect of a female and the other of a male, though both had two sets of genitals. Many chroniclers tried to explain the existence of such departures from ‘normal’ by juxtaposing both natural causes (following Aristotle), and divine responsibility, (following St. Augustine’s idea that Nature reflects the will of God). Like other chroniclers of prodigies in the 16th and 17th centuries, Lycosthenes introduced monsters in the context of a group of related terrestrial and celestial natural phenomena. For him, many monsters and other portents had natural causes, although what they were was often difficult to determine.  Therefore, he determined that the responsibility of such monstrous occurences lay with God. Monsters were thus viewed as signs and portents through which God communicated with man.  Especially during the religious wars of the 16th century, they were often interpreted as political or religious omens.

The end of the 16th century was marked by profound cultural changes, stimulated principally by the end of the Wars of Religion.  Wonders, and monsters in particular, began to be interpreted less frequently as bad omens:  they therefore inspired less horror.  Curiosity and admiration of Nature’s products became predominant, resulting in a more diverse group of scholars writing books about prodigies and wonders.  As one historian has noted, the seventeenth century was a time when the study of wonders “became a reflection not of ignorance but of virtuosity and connoirsseurship: the product not only of great experience and erudition, but also of impeccable taste”.

Although there was an increasing number of books, there were few documented prodigies, resulting in the repeated use of the same illustrations to accompany stories of monsters.  Although Renaissance writers were largely inspired by these works, they were also critical of them, and providing an eschatological explanation for prodigies. In some instances, such as in Des Prodiges, classical naturalistic and contemporary eschatological views on prodigies were juxtaposed.

By the end of the 17th century, however, it was only in pamphlets and broadsides that monsters were still treated as frightening signs of God. Educated classes were beginning to despise this literature, viewing it as a sign of popular ignorance and superstition.

By the end of the 17th century, natural philosophy had made an important shift toward adopting an orderly conception of nature.  Scientific societies started to challenge wonders by questioning the truth of strange phenomena. The quest for truth and the norm begin to conflict with the love of the marvelous and unique. As doctors began to specialize, focusing on the medical fields of anatomy and embryology, by the middle of the 18th century, philosophers of “enlightenement” boldly set forth new theories that presented the monstrous as a non-metaphysical phenomenon.

In the first half of the 19th century, teratology became a science free from considerations of God’s direct interference in natural processes.  It also limited its area of study to birth defects, therefore eliminating imaginary monsters.

Anatomists approached the question of monstrosity as a whole and confirmed that it was a part of the evolution of the foetus. They depicted ‘monstrosity’ as part of a natural process, rather than as an independently produced phenomenon. Furthermore, they established a distinction between physical anomaly and monstrosity, and created a specific vocabulary for each of them.

Rejecting previous classifications which were limited to a description of different monsters, Geoffroy de St. Hilaire elaborated a new classification system emphasizing the character of monstrosity rather than the individual monster.

The early nineteenth century also witnessed the first attempts by men (Dareste ) to artificially create monstrous deformity in living organisms as a way to better understand the mechanisms that led to monstrosity.

Frankenstein was first published in 1818.  Its author, Mary Shelley, was well aware of the medical and other scientific discoveries of her time, and used them in her novel.  Far from describing a ‘freak’, Shelley described a monster created by science, and in doing so anticipated the more benign monsters such as those produced by teratologists later. More about the Frankenstein monster here. 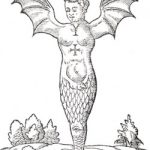