The first candidates to become a vampire are those who commit crimes against man or religion. This is certainly the broadest, if not most abundant, category for potential vampires.

As society needed a scapegoat to blame for the calamities of these times, people on the fringes of society and the church made an easy target and were quickly disposed off, living the kingdoms and the Church free of potential trouble-makers.

The Church has long considered suicide one of the unforgivable sins. It was commonly believed in Christian Europe that such souls were unable to rest in the grave, especially in hallowed ground. Their bodies could not decay and return to their original dust (the most commonly accepted proof of vampiric infection) and they left their graves at night to prey upon the living who were granted the chance of salvation that they were denied. The act of excommunication prohibited one from receiving the sacraments of the church. This case is similar to that of the suicide. He who died excommunicated was believed to be unable to return to dust or to find release from the body.

Those who were particularly cruel or violent in life were believed to be prime candidates to return from the grave as vampires. Bulgarians included robbers, highwaymen, arsonists, prostitutes, deceitful and treacherous barmaids and other dishonourable people. Those who led dissolute or debauched lives were also likely to return as vampires. This, of course, was only the case for those individuals who did not repent and receive absolution before death. Again, the soul was believed to be bound to the body, preventing the natural decomposition of the body. And while the soul was bound to the body it was also bound in servitude to Satan.

Those who practiced black magic or summoned spirits were believed to servants the devil and particularly subject to vampirism. If a witch or a black sorcerer died unrepentant he, like the suicide or the excommunicant, was bound to earth and unable to pass into the next world. Also, the witch or sorcerer was more subjected to demonic infestation. The offspring of a witch or a sorcerer were also subjected to becoming a vampire after death. This was especially true if there was reason to suspect that the child might be the result of a union between a witch and an incubus or a sorcerer and a succubus.

There was a strong link between the werewolf and the vampire. Unlike the vampire, the werewolf was not generally believed to be immortal. It was commonly held that when a werewolf died he was most likely to return as a vampire. Also, those who were killed by a werewolf were thought to be prime candidates for resurrection as a vampire. Often the two curses were to be found in the same geographic regions. 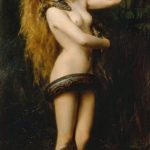