It is important to be able to recognize a werewolf in his human form, as it is the only circumstance when he is vulnerable.

“A werewolf may easily be detected, even when devoid of his skin; for his hands are broad, and his fingers short, and there are always some hairs in the hollow of his hand. “ 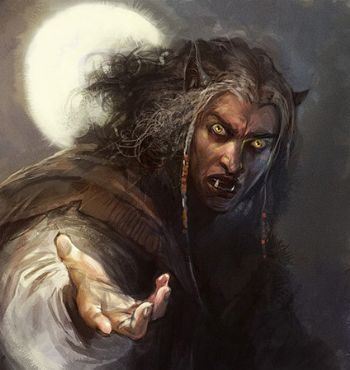 Check the palms of a suspected werewolf, and if his palms are covered with a coarse, stiff growth of hair, you had better avoid his company on the nights of the full moon.  Real werewolves often shave their palms leaving them rough so rough palms are also considered to be a sign.

Another certain sign of the werewolf, according to a vast number of ancient traditions, lies in the extreme length of the index finger.  If you should notice a man or woman with an index finger considerably longer than  the middle finger, you have quite likely spotted a werewolf.

In human form, a werewolf usually has slanted eyebrows that meet at the bridge of the nose.

Small pointed ears, protruding teeth (elongated canine) or strangely compelling eyes are also visible sign you are in a presence of a full-moon beast.

A were-person is easily detected when there have been nighttime attacks in a neighborhood. He or she has no appetite, because of the feasts of raw meat taken during the night; and is always physically exhausted after his transformation and nocturnal activities, thus requires much rest in the daytime. Werewolves always have to sleep with their jaws open. Once their jaws are closed, it difficult to unclench them.

A werewolf in human form exhibits the wounds acquired from his lunar activities. An often-repeated story concerned a lone man attacked at night by a lone wolf, which he wounded, usually by cutting off a forepaw. Next day a woman would be found with her hand missing, which identified her as the werewolf. Such an incident was reported as fact by Jean de Nynauld in 1615; the woman in the case was burned alive. The story probably recommended itself to some men as a perfect way to dispose of a woman they had mistreated, such as a rape victim.

Sometimes, in order to see if the accusation was true, the suspect werewolf was cut open to see if there was fur on the inside of the skin, as many people believed that a werewolf could reverse its skin in order to avoid recognition.

When hunting for a werewolf it is important to remember that your biggest clues will come through your suspects personalities. Becoming a werewolf is not transparent, no matter how the victim tries to hide the tainted, subhuman blood appearance.

Therefore, look for symptoms in your human suspects that include increasing violence, increasing aggression, unprovoked rages, insomnia, restlessness, and other bizarre behavior. Unfortunately, over time these symptoms can be brought under control, so do not rely on them exclusively.

The werewolf hunters did have some clues when it came to  detecting the werewolves among them.  As early as the seventh century, Paulos Agina, a physician who lived in Alexandria, described the symptoms of werewolfism for his fellow doctors: