In the year 196X, two astronauts, Fuji and Glenn, are sent to investigate the surface of the mysterious “Planet X”. There they encounter advanced and seemingly benevolent human-like beings called the Xiliens and their leader the Controller. The aliens usher the astronauts into their underground base, and moments later the surface is attacked by a creature that the Xiliens call “Monster Zero”, but which the astronauts recognize as King Ghidorah, a planet-destroying monster that had attacked Earth once before. The monster eventually leaves, but the Controller states that King Ghidorah has been attacking repeatedly, forcing them to live underground in constant fear. He requests to borrow the Earth monsters Godzilla and Rodan to act as protectors to fight it once more (since 1964), in return for the cure for cancer (the English dub says that the formula can cure any disease). The astronauts return to Earth and deliver the message.

Meanwhile, an inventor named Tetsuo has designed a personal alarm that emits an ear-splitting electric siren. He sells it to a businesswoman named Namikawa, but she disappears before paying him. Tetsuo is romantically involved with Fuji’s sister, Haruno, but Fuji disapproves, finding him unworthy of Haruno. Tetsuo sees Namikawa with Glenn and later follows her, but he is captured and imprisoned by Xilien spies.

Glenn and Fuji begin to worry that the Xiliens may have ulterior motives. Their suspicions appear confirmed when three Xilien spacecraft appear in Japan. The Controller apologizes for coming to Earth without permission. The Xiliens locate Godzilla and Rodan, both sleeping, and use their technology to transport them to Planet X. They also bring Glenn, Fuji, and the scientist Sakurai with them. After a brief confrontation, the Earth monsters succeed in driving King Ghidorah away. Glenn and Fuji sneak away during the battle and encounter two Xilien women, both of whom look identical to Namikawa. Xilien guards confront the astronauts and bring them back to the Controller, who reprimands but does not punish them. The astronauts are given a tape with instructions for the miracle cure and sent home, leaving Godzilla and Rodan behind. The tape is played for the world’s leaders, but instead it contains an ultimatum demanding that they surrender Earth to the Xiliens or be destroyed by Godzilla, Rodan and King Ghidorah, who are all under the aliens’ mental control.

Glenn storms into Namikawa’s office and finds her in Xilien garb. She admits that she is one of their spies, but confesses that she has fallen in love with him. Her commander arrives to arrest Glenn and executes Namikawa for letting emotion cloud her judgment, but not before she slips a note into Glenn’s pocket. Glenn is taken to the same cell as Tetsuo. They read Namikawa’s note, which explains that the sound from Tetsuo’s invention disrupts the Xiliens’ electronics. Tetsuo has a prototype with him, which he activates, weakening their captors and allowing them to escape.

Sakurai and Fuji build a device to disrupt the Xilien’s control over the monsters. Glenn and Tetsuo arrive to share the Xilien’s weakness. As the monsters attack, Sakurai’s device is activated and the sound from Tetsuo’s alarm is broadcast over the radio. The invasion is thwarted and the Xiliens, unable to fight back or retreat, destroy themselves en masse. The monsters awaken from their trances and a fight ensues. All three topple off a cliff; King Ghidorah flies away into outer space, while those watching speculate that Godzilla and Rodan are probably still alive. Fuji acknowledges Tetsuo’s important role in the victory and no longer thinks poorly of him. Sakurai states that he wants to send Glenn and Fuji back to Planet X to study the planet thoroughly (the English dub says that they are to be ambassadors). The astronauts are reluctant, but make the best of the moment, happy that Earth is safe. 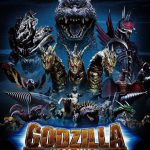