According to conspiracy theories, the Illuminati or ‘Cult of the Serpent’, is a secret organization that cooperates with aliens to establish the ‘New World Order’ .

Quest, the JASON Society, the Roshaniya, the Qabbalah, the Knights Templar, the Knights of Malta, the Knights of Columbus, the Jesuits, the Masons, the Ancient and Mystical Order of Rosae Crucis, the Thule Society, the Nazi Party, the Brotherhood of the Dragon, the Rosicrucians, the Royal Institute of International Affairs, the Trilateral Commission, the Bilderberg Group, the Open Friendly Secret Society (the Vatican), the Russell Trust, the Skull & Bones, the Scroll & Key were or are allegedly all connected together.

The JASON Society, or JASON Scholars, takes its name from the story of Jason and the Golden Fleece, and it is a branch of the Order of the Quest, one of the highest degrees in the Illuminati. The golden fleece takes on the role of truth to JASON members. Jason represents the search for the truth. Therefore the name JASON Society denotes a group of men who are engaged in a search for the truth. The name Jason is spelled with capital letters when used as the name of the JASON Society. Lower-case letters are never used when referring to this secret group. The name may even have a deeper meaning, as the name “Jason” and the Golden Fleece appear throughout history in relation to various other secret societies. In these instances the story represents man (Jason) looking for himself (Golden Fleece).

The JASON Group is a scientific organization formed and hired by the JASON Society and the U.S. Government Founders of the JASON Group include members of the famous Manhattan Project, which brought together almost every leading physicist in the nation to build the atomic bomb during World War II. The group is made up mostly of theoretical physicists and is the most elite gathering of scientific minds in the United States. As of 1987 the membership included four Nobel Prize winners. Today JASON continues to offer scientific help the government cannot find anywhere else. They are probably the only group of scientists in the United States that know the true state of highest technology.

The Council on Foreign Relations is a private organization of business executives, scholars, and political leaders that studies global problems and play a key role in developing U.S. foreign policy. The CFR is one of the most powerful semi-offlcial groups concerned with America’s role in international affairs. It is controlled by an elect group of men recruited from the Skull & Bones and the Scroll & Key societies of Harvard and Yale, which are both chapters of a secret branch of the Illuminati known as Chapter 322 of the Order. The members of the Order make up the Executive Committee of the Council on Foreign Relations after undergoing initiation into the Order of the Quest, also known as the JASON Society.

The Council on Foreign Relations is an off-shoot sister organization to the British Royal Institute of International Affairs. Their goal is a New World Order. Although it existed as a dinner dub in New York, it did not take on its present power until 1921, when it merged with the Royal Institute of International Affairs and received its financial base from J.P. Morgan, the Carnegie Endowment, the Rockefeller family, and other Wall Street banking interests.

The heart of the Bilderberg Group consists of 39 total members of the Illuminati. The three committees are made up exclusively of members of all the different secret groups that make up the Illuminati, the Freemasons, the Vatican, and the Black Nobility. This committee works year round in offices in Switzerland. It determines who is invited to the annual meeting and what policies and plans will be discussed. Every proposal or plan that has ever been discussed at an annual meeting of the Bilderberg Group has come to pass usually within one or two years following the meeting. 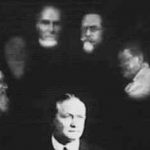