The story of Albert Ostman, a 64-year-old retired lumberman from British Columbia, went public in 1957 with a tale he had kept to himself since 1924, for fear of being ridiculed. Ostman’s "sleeping-bag snatch" remains the most elaborately detailed account of Bigfoot contact : a first-person account of abduction.

While on a camping trip near Vancouver Island, Ostman found that something had disturbed his supplies and food on two nights in a row. A Native American trail guide had warned him about the presence of local Bigfoot when Ostman set up his camp, and this was the first time Ostman had ever heard of the creatures, but he didn’t think they could be the culprits messing with his gear.

Then one night Ostman was shaken awake to find himself being indelicately carried away inside his sleeping bag. The opening of the sleeping bag was held shut, and Ostman had no choice but to be dragged along the forest ground for what he estimated to be 25 miles, nearly suffocating.

After what seemed like a three-hour ordeal, he was thrown to the ground in a heap, and emerged to find himself in the company of four Bigfoot. Ostman described them as a family, with a father and a mother and their pair of offspring, one male and one female. He indicated that the adult male, his kidnapper, was over eight feet tall and powerfully built, covered in dark hair all over. The children, though smaller, were still about seven feet tall. 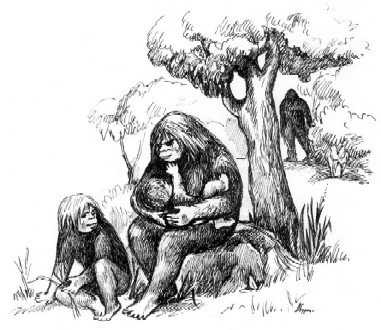 Ostman said the Bigfoot chattered amongst themselves in a seemingly intelligent language, and although they did not hurt or threaten him, they were determined not to let him leave. Their lair was inside a small valley enclosed by cliffs, and the adult male stood guard at the only apparent entry passage. Ostman suggested that he may have been selected as a prospective mate for the young female.

Ostman claimed that he was held captive for a period of six days. In that time he formed a tentative bond with the younger male, who became fond of sampling Ostman’s snuff. That gave Ostman an idea.

He offered his snuff to the adult male, which impulsively dumped the entire container into his mouth. The tobacco rush incapacitated the big Sasquatch in short order, making him writhe on the ground in overwhelming discomfort. Ostman seized the opportunity to escape, and never told anyone his fantastic tale until three decades later, when it seemed the world might be ready to listen.