In Croatian and Slovenian lore on the peninsula of Istria, a person born with a caul (embryonic membrane still attached to the top of the head, forming a veil) was destined to become either a kudlak or a krenik.

A person so destined to become a kudlak would begin already begin a career of evil while still alive – his soul would leave his body at night in animal form and fly through the air to attack people or to magically do other harm to the community he lived in. When he died, he became an undead vampire who was then an even greater threat to the community.

But if a person born with a caul became a kresnik, he became a champion of the community. While he lived, his soul left his body in animal form at night to fight against both living and undead kudlaks.

For more details on the kudlak and the kresnik see the books The Darkling by Jan Petrowski (Slavica Press, 1989) and Ecstasies by Carlo Ginzburg.(Penguin Books, 1992). 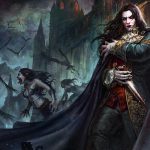