The Leprechaun is a diminutive male solitary Irish faery who loves to play pranks on humans. 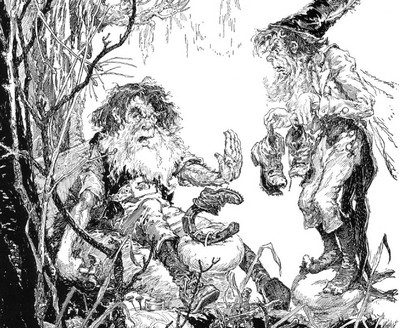 Leprechauns are described as merry folk, dressed in traditional green with red or green tri-coloured caps and buckled shoes.

The name leprechaun may have derived from the Irish leath bhrogan (shoemaker), although its origins may lie in luacharma’n (Irish for pygmy).

The leprechaun ‘family’ appears split into two distinct groups – leprechaun and cluricaun. Cluricauns may steal or borrow almost anything, creating mayhem in houses during the hours of darkness, raiding wine cellars and larders. They will also harness sheep, goats, dogs and even domestic fowl and ride them throughout the country at night.

Leprechauns can be found in wild areas with large grassy hills.

Leprechauns are shoemakers by trade, however they only work on one shoe and only serve other fae. They do not enjoy working with fellow faeries and keeps to himself except for at parties. They have been known to invite humans do these, which can be joined as long as they do not ear, drink, or dance with them.

Leprechauns have one wickness, they are frequently to be found in an intoxicated state, caused by home-brew poteen. However they never become so drunk that the hand which holds the hammer becomes unsteady and their shoemaker’s work affected. Besides the fact they can use foul language, they also smoke awful smelling pipes and manage to drink a lot of stout, even straight from the jug.

Leprechauns have also become self-appointed guardians of ancient treasure (left by the Danes when they marauded through Ireland), burying it in crocks or pots. This may be one reason why leprechauns tend to avoid contact with humans whom they regard as foolish creatures. If caught by a mortal, the leprechaun will promise great wealth if allowed to go free. He carries two leather pouches. In one there is a silver shilling, a magical coin that returns to the purse each time it is paid out. In the other he carries a gold coin which he uses to try and bribe his way out of difficult situations. This coin usually turns to leaves or ashes once the leprechaun has parted with it. However, you must never take your eye off him, for he can vanish in an instant.

The Leprecaun or Fairy Shoemaker

Written by William Allingham, this poem gives a vivid and evocative picture of a leprechaun as he sits hidden in his underground cave, making shoes for the fairies.

A wrinkled, wizen’d, and bearded Elf,
Spectacles stuck on his pointed nose,
Silver buckles to his hose,
Leather apron – shoe in his lap