The possessions at Louviers (Normandy, France) took place at the Louviers Convent in 1647. Sister Madeleine Bavent, who was eighteen years old at the time, was the initial possession victim whose testimony started the investigation.

Supposedly, Father Mathurin Picard (nunnery director) and Father Thomas Boulle (vicar at Louviers) had taken the nuns to secret sabbats where they had sexual intecourses with demons, namely the demon Dagon by Bavent’s testimony. Similar testimony of the other nuns followed. Picard and Boulle were convicted on the evidence of the possessed nuns.

Father Boulle was tortured during the exorcism. Sister Bavent was imprisoned for life, Father Boulle was burnt alive, and the corpse of Father Picard (who was fortunate enough to have died earlier) was exhumed and burned.

Upon further investigation it was discovered that the nuns were suffering from the classic symptoms of possession.

Throughout the whole history of Witchcraft there is no history so hideous as that of Madeleine Bavent, Mathurin Picard, and Thomas Boulle. Nowhere have I read so hideous a confession.

The details are so utterly abominable that even the soul of a priest steeped in the fires of the confessional, whom no human aberration can shock or surprise, shudders and sickens at the dark mass of turpitudes which are as tlic stench and vomit of the pit of hell.

In 1616 at Louviers, a busy little old-world town of Normandy situate on the river Eure, some seven-and-twenty miles from Rouen, was founded the convent of S. Louis IX and S. Elizabeth of Hungary, for a community of Regular Tertiaries of the Third Franciscan Order. Their first director was an old priest named David, shortly to be succeeded by Mathurin Picard, the vicar of Mesnil-Jourdain, whose curate, Thomas Boulle, assisted him, and upon his death in 1842 was installed with full responsibility in his room. By some unhappy fate, it was more than mere chance, without design-all three were adherents of the Manichees, concealing their Satanism under the disguise of orthodox sanctity.

From the commencement they set to work to corrupt the hapless religious whose faithful pastors and guardians they should have been, and instead of lifting their souls to heaven they dragged them down to the nethermost inferno. As early as l634 there were indications that something was seriously amiss. Two or three Sisters were seized with fits of an abnormal nature, now standing rigid in some paralytic trance, now foaming on the ground in an epilepsy and writhing as some boneless contortionist of the circus arena. Matters, however, seem to have been hushed up for a while, although the infamous Picard ran some danger of being exposed. He was, in truth, the Chief Officer and Grand-Master of all the witches and devil-worshippers throughout the district. Having seduced and entirely subjected to his will an unfortunate nun, Madeleine Bavent, he used her as his instrument, his associate, and intermediary. There can be no doubt, I think, that Picard must have possessed extraordinary Hypnotic powers, and Madeleine Bavent is probably not to be accounted morally responsible for the orgy of crime into which she was plunged.

The details are known from the confession which she wrote in prison at the instance of the Abbe de Marets, an Oratorian, who helped and counselled her in those hours of penitence and remorse. Several nights a week she was awakened just before Matins, that is to say about midnight, but one of the nuns, and conducted to the Sabbat. It is clear that Picard had provided himself with false keys so that he could gain admission to any part of the cloister at any hour. She declared that she never used any ointment or recited any spell, but that she was conveyed to the Sabbat by the power of Picard without knowing how she arrived there, obviously in a state of trance. T

he exact place where the Sabbat took place she could not identify, but it was presumably in some house not far from the convent. It was a long and narrow room, lighted by flares and the candles upon the Devil’s altar which had been erected there. This certainly suggests a cellar. A number of persons dressed as priests were present, and some in grotesque masking habits, half-animal, half-human. She never assisted at any adoration of the demon in the form of a goat, and the rites were seldom followed by a banquet.

The Black Mass of Satan was continually said at the altar. The host appeared to be of a red colour, and communion was given to the worshippers. The liturgy was read from a book of blasphemies, which was Carried in procession. It contained the most hideous maledictions against all things sacred and divine, and seems to have been a manuscript rather than a printed book. There was also a register or roll of the Satanists in which her name had been inscribed by David. This was kept with the utmost care and Madeleine was never told the names of any who were present. She recognised four religious from her own house, Catherine of the Cross, Catherine of  S. Genevieve, Elizabeth of the Nativity, and Anne Barre, also Thomas Boulle and several other priests whom she knew only by sight, probably as having served the convent chapel.

Prominent among the assistants were an elderly man with iron-grey hair, who was generally richly dressed in a purple velvet suit, and a matron, said to be Mother Frances of the Cross (in the world Simonne Gangain, a co-foundress of the Louviers convent, who ordinarily resided at Paris. It is impossible to relate certain abominations and unnatural defilements of the Blessed Sacrament which these evil priests practised. The details are frankly too monstrous for reproduction. The wretched woman further related: “

On the Good Friday night of one year Picard and Boulle brought with them four Hosts; of these they put in their own mouths, and the other two into Mother Simonne’s mouth and mine; then they exchanged theirs for ours in order to cement for ever the union and connexion between us. One night, after the book of blasphemies had been carried in procession, a little crucifix was brought in and large Hosts were nailed to the hands and feet of the figure of Christ, and each one present stabbed the Hosts with a sharp knife. There fell two or three drops of blood, which were gathered up carefully and preserved with the Hosts to confect a charm. ” I cannot but believe,” she cried in tones of utter despair, ” that this is a renewal of the Crucifixion of Our Lord.” On one occasion a priest brought a Host to burn it; and another time a priest brought a chalice half-filled with the Precious Blood, which they poured out over the floor. One Holy Saturday a woman handed over to these men-devils her newly born child.

The babe was crucified on a rough cross, its little hands and feet being fastened to the wood with nails which pierced large Hosts. Two men, who had ventured to the Sabbat out of curiosity, filled with horror at the spectacle refused to take part in the orgies of lust and murder. They were not allowed to leave the house alive. Picard used to delight to subject the miserable Madeleine to the most infamous sexual connexions, to prostitute her publicly before the fiendish assembly, In fine, the pages of de Sade contain nothing fouler than the confessions of  this wretched woman; the most cruel and obscene episodes of Justine or Juliette pale before the sworn statement of this demoniac nun.

Mathurin Picard died in 1642, and was buried in the chapel of the Franciscans, near the choir grille. No doubt Boulle, who succeeded him, could not maintain the same magnetic influence over the Sisters as their late director, and the mastermind removed conscience began to make itself heard. Several religious sickened of a strange malady, and were driven almost to madness by their guilt and the pangs of remorse. They uttered piercing cries, accusing themselves of hideous crimes. Fear fell upon them, and before long some twenty inmates of the house were in the last stages of nervous disorder, broken in spirit and body. The thing could not be hidden, and early in 1643 the Bishop of Evreux, Monsignor Francois Pericard, determined to begin a thorough investigation. He was assisted by several Capuchin fathers of great tact and experience. The nuns soon made the most alarming confessions, mortally implicating Madeleine Bavent, who they seem to have regarded as the chief instrument of their undoing, the dead Picard, the living Boulle.

The good Bishop did not delay to promulgate his sentence. Madeleine Bavent was to be degraded from religion and imprisoned for life; the body of Picard was no longer to be suffered to remain in consecrated earth, but to be disinterred and flung with contumely into a ditch, le Puits Cronier, which lay outside the boundaries of the town; Boulle was pronounced worthy of death. This judgement was delivered on 12 March, 163, and before a few months were out Monsignor Pericard heart-broken at the insults offered to the Most Holy Sacrament, had sunk into an untimely grave. Secular justice stepped in, and the accused were transferred to Rouen. Delay followed delay, and procrastination procrastination, until after four years a final condemnation was issued by the supreme courts.

On 21 August, 1647, Thomas Boulle, after having humbly begged pardon of God and the King before the principal door of Rouen Cathedral, was degraded from all ecclesiastical order, and burned alive in the market-square. The corpse of Picard was flung into the same fire. Madeleine Bavent remained in close confinement, and ended her days forgotten in a dungeon. At first she revolted against her doom, and attempted suicide, wounding her throat with a knife she had concealed and thrusting it into her side. She also swallowed glass, and would have starved herself to death. In time a deep resignation succeeded, but there is no further record of her fate. 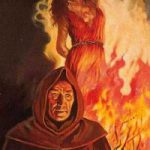