It also seems that lycanthropy is not specific to an experience of human-to-wolf transformation. In fact, there is a small ark of creatures that have been reported as part of the shape-shifting experience. A recent review of the medical literature from early 2004 lists over thirty published cases of lycanthropy, only the minority of which have wolf or dog themes.

Canines are certainly not uncommon, although the experience of being transformed into cats, horses, birds and tigers has been reported on more than one occasion, with frogs, and even bees, being reported in some instances.

A 1989 case study described how one individual reported a serial transformation, experiencing a change from human, to dog, to horse, and then finally cat, before returning to the (perhaps rather mundane) reality of human existence after treatment.

More curious are the reports of people who experienced transformation into an animal only listed as ‘unspecified’, leaving the reader to wonder whether the patient claimed to be changing into a creature so obscure, it left the hospital staff baffled.

Perhaps we should be encouraging psychiatrists to brush up on their zoology in case they are missing rare species in their consulting rooms. 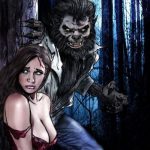 A modern case of lycanthropy