Dr. Marie-Jeanne Koffman (1919-2021) was one of the most acknowledged authorities on the Russian almasty (or Russian snowman). She was born in Paris in 1919 and went to live in Russia where she resided for many years.
She retired in a rest home in France.

The French-born doctor became a captain from the Red Army after having emigrated to Russia before WWI. She spent over 20 years travelling the mountains on horseback in the Pamir mountains and Azebaïdjan to interview an estimated 500 eye-witnesses, collect unidentified footprints and examine piles of suspected alma droppings but has not collected other evidences than tracks and testimonies.

Her research enabled her to produce a detailed composite of the elusive creatures, sometimes supposed to be relic Neanderthals, driven into the wilderness by their more successful Cro-Magnon cousins tens of thousands of years ago. 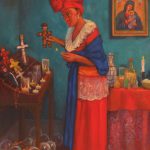