Historical records state that Marie Laveau was born a free woman of color in colonial New Orleans was the biological daughter of Charles Trudeau, and her mother was Marguerite Darcantel.

On August 4, 1819, she married Jacques Paris (also known as Jacques Santiago in Spanish records), a Quadroon free man of color who had fled as a refugee from the Haitian Revolution in the former French colony Saint-Domingue. They had two daughters, Felicite in 1817 and Angele in 1820. Both disappear from the records in the 1820s. Jacques Santiago Paris worked as a carpenter. The death of Jacques Paris was recorded in 1820.

Following the reported death of her husband Jacques Paris, she entered a domestic partnership with Christophe Dominick Duminy de Glapion, a nobleman of French descent, with whom she lived until his death in 1855.They were reported to have had 15 children (it is unclear if that includes children and grandchildren). The only two children to survive into adulthood were daughters: the elder named Marie Eucharist Eloise Laveau (1827–1862) and the younger named Marie Philomene Glapion (1836–1897).

Marie Laveau is confirmed to have owned at least seven slaves during her lifetime. She run during many years a beauty parlor where she was a hair-dresser for the wealthier families of New Orleans. She excelled at obtaining inside information on her wealthy patrons by instilling fear in their servants whom she either paid or cured of mysterious ailments.

During her life Marie Laveau was known to have attended to prisoners who were sentenced to death. Rumors circulated that some prisoners would receive poisons or other substances before going to the gallows, but this was never proven. Marie Laveau also sought pardons or commutations of sentences for those she favored and was often successful in her efforts.

Marie Laveau quickly became the queen of voodoo in New Orleans. Laveau was able to rise to such a prominent position in New Orleans through a combination of her strong personality, charity works, and natural flair for theatrics.

She was the third female leader of Voodoo in New Orleans and she maintained her authority throughout her leadership (the first was Sanité Dédé, who ruled for a few years before being usurped by Marie Salopé). Although there was an attempt to challenge her in 1850. She was said to be a devoted student of Dr John. During her decades as queen, she had been asked questions about her family disputes, health, finances, and more. In addition, she performed her services in three main places as queen: Her Home on St. Ann Street, Go Square, and Lake Pontchartrain. Due to her strong influence, New Orleans Voodoo lost a large number of adherents after her death.

Marie Laveau was a devoted Catholic all her life, and to her voodoo was not incompatible with her Catholic faith.

Marie Laveau would organize the Sunday Congo Square celebrations on Sundays and sell her gris-gris bags, offer advice and service to her community, and partake in the celebration. It is here that legends talk about her singing and performing her spiritual celebrations, conjuring the Great Serpent Spirit and becoming filled with the spirit of loa, wearing her Queen of Voodoo. crown, proudly.

The front room of her cottage housed altars filled with candles, holy images, and offerings, and she would lead weekly meetings (that included whites as well as blacks) where the participants would dress all in white, then chant and sing and leave an offering of liquor and food to the spirits.

Marie Catherine Laveau Paris Glapion died on June 15, 1881, aged 79. At the time of her death, The New York Times, The New Orleans Daily Picayune, the Daily States and other news sources describe her as “woman of great beauty, intellect, and charisma who was also pious, charitable, and a skilled herbal healer.”

She is generally believed to have been buried in plot 347, the Glapion family crypt in Saint Louis Cemetery No. 1, New Orleans. Tourists continue to visit and some draw X marks in accordance with a decades-old tradition that if people wanted Laveau to grant them a wish, they had to draw an X on the tomb, turn around three times, knock on the tomb, yell out their wish, and if it was granted, come back, circle their X, and leave Laveau an offering.

In 1982, New Jersey-based punk rock group The Misfits were arrested and accused of attempting to exhume Laveau from her grave after a local concert. Since March 1, 2015, there is no longer public access to St. Louis Cemetery No. 1. Entry with a tour guide is required because of continued vandalism and the destruction of tombs.

But there is another opportunity to get close to Mary Laveau. Today the celebration of St. John’s Eve is still alive and revered. It takes place on Bayou St. John in New Orleans and brings together the practicing Voodoo community, as well as those with respectful curiosity. You will find everyone dressed in white and following the lead of local Voodoo Priestess, Sallie Ann Glassman, doing their best to make Marie proud. 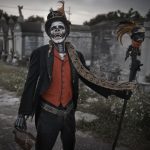 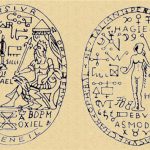