In 2004, director Yoshimitsu Banno acquired permission from Toho to produce a short IMAX Godzilla film. In 2009, the project was turned over to Legendary Pictures to be redeveloped as a feature film. Announced in March 2010, the film was co-produced with Warner Bros. Pictures and was directed by Gareth Edwards. It is the second incarnation of Godzilla to be created by an American studio, after TriStar’s 1998 film Godzilla, and overall the tenth onscreen incarnation of the iconic character.

This incarnation of Godzilla is depicted as the sole survivor of a prehistoric superspecies, theorized by Ishirō Serizawa, acting as a force of nature that maintains balance. High tech special effects, including motion-capture, brought the beast to life with a decidedly darker tone much more in line with how Godzilla was first envisioned.

The character was initially designed by Matt Allsopp, modeled after the Toho version. In Godzilla: King of the Monsters, Godzilla is given the scientific name “Titanus Gojira”, after the designation for the monsters was changed from “MUTOs” (Massive Unidentified Terrestrial Organisms) to “Titans.” A post-credits scene in Kong: Skull Island featured cave paintings of Godzilla, Rodan, Mothra and King Ghidorah.

Godzilla was theatrically released on May 16, 2014, to positive reviews and was a box office success, grossing $529 million worldwide against a production budget of $160 million. The film’s success prompted Toho to produce a reboot of their own and Legendary to proceed with sequels and a shared cinematic franchise, with Godzilla: King of the Monsters released on May 31, 2019, and Godzilla vs. Kong released on March 24, 2021.

Godzilla is fighting against his four most popular enemies, Rodan, Mothra, King Ghidorah and Kong.

Comprising the rest of the ongoing Reiwa era is the Netflix anime trilogy which follows a group of human refugees who attempt to recolonize Earth nearly 20,000 years after they were driven out by Godzilla–of course, he’s still there, bigger and badder than ever before. 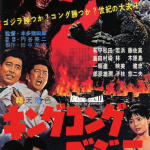 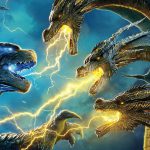